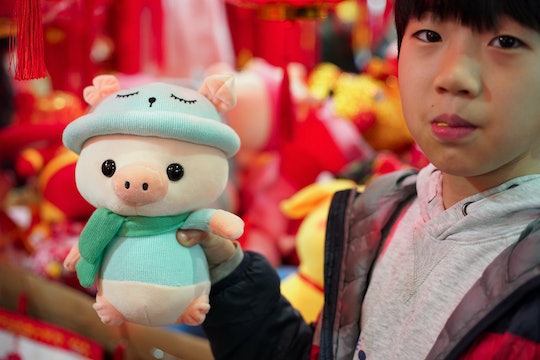 The Chinese lunar calendar is about to turn to a new year, and those who celebrate will do so in grand style: parades, fireworks, feasts with foods symbolizing good luck and long life. The Lunar New Year also means a shift to a new sign in the Chinese zodiac: The period from February 5, 2019 to January 25, 2020 will be the Year of the Pig. Moms who are (or who will be) expecting this year might wonder, what does it mean when a baby is born in the Year of the Pig? Of course, every baby is a cause for celebration, but will there be a significance to having this year on your birth certificate?

There could be. One of the primary differences between the Western and Chinese zodiacs is the way the signs are timed. In Western astrology (the type most Americans are familiar with), the signs are determined by the position of the sun in a particular month. Chinese astrology cycles through a 12-year period, with each year represented by one sign, according to the Asia Society. The Pig is the final animal in the 12-year cycle; as the Chinese New Year site explains, legend has it that the Jade Emperor determined the order of the zodiac by the order in which the animals arrived at his party. The Pig overslept and arrived last.

But like the Western zodiac, each of the Chinese signs is associated with certain personality traits, both positive and negative (beyond the excessive sleepiness and/or tendency to sleep late that made the OG Pig tardy to the Emperor's get-together, that is). So if your new arrival makes their appearance this year (or in 2031, for those really planning ahead), this is what you can expect: