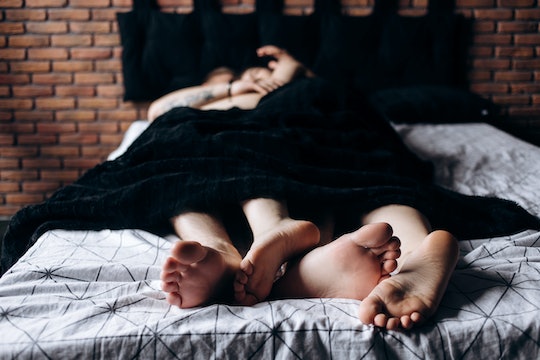 To say that semen is an acquired taste is kind of an understatement. I don’t know of many women who would readily admit to truly enjoying the taste of it. And contrary to what the actors in adult films would have you believe, swallowing semen isn’t a highlight for many of us during sex. So what does semen taste like?

It’s hard to say — literally. Semen certainly doesn’t taste like it belongs in any one food group, like an apple or turkey. It’s challenging to put the taste into words, other than it’s kind of indescribable. In a Thought Catalog story, some women described what semen tasted like, classifying it as tasting like anything ranging from oysters to black truffles and salty seawater to slimy pool water. Not very enticing, right? One woman even said it tasted like old pennies, while another pointed out that it tasted like “when you chewed on a balloon as a kid.” Blech.

In an infamous Sex & the City episode, Samantha stated to her gal pals: “I’m dating a guy with the funkiest tasting spunk.” She likened the taste to “asparagus gone bad,” and then clarified that it wasn’t just asparagus, but asparagus with Clorox, which prompted Carrie to cancel her rice pudding order.

But what about its smell? Since scent and taste are so closely tied together, it stands to reason that sperm's scent is right up there with its taste. According to Healthline, semen is comprised of 1 percent sperm and 99 percent additional enzymes, proteins, and minerals, like magnesium, calcium, copper, zinc, and sulfur. And because these substances are alkaline, they typically cause semen to smell like bleach, ammonia, or, chlorine (which means Samantha Jones was right on the money).

So why is semen such a bitter pill to swallow? It all comes down to human reproduction. Sperm has to be alkaline in order to boost its chances of surviving inside the vagina, reported Men’s Health. A high pH level (over 7.0) means that the sperm will be able to withstand the vagina’s natural acidic nature.

Now we know that semen tastes like something salty, has a somewhat chemical composition, and is slimy and goopy in nature. Unless you like that flavor (and I’m guessing that if you’re reading this article that you might not exactly be sold on your sweetie’s semen), the real question remains: Can you change the smell and scent of semen?

The good news is yes, you can. Thankfully, the taste of semen is affected somewhat by diet. There are many rumors about the potency of pineapples making semen sweeter, and there is some truth to that theory, according to Women’s Health. Apparently, almost any fruit (think pineapples, melons, berries, peaches, etc.) can increase the sperm’s natural fructose and glucose levels, thereby rendering it tastier.

Even the herbs that spice up your cooking can help spice up things in the bedroom. Peppermint, spearmint, cinnamon, and parsley improve the taste of semen, too. You can even try foods that have chlorophyll — such as spinach or celery — to improve the taste.

And on the flip side, there are definitely foods that your partner should avoid if he wants oral sex anytime soon, as Men's Health warned. Red meat, dairy, and broccoli have all been known to make semen pretty unpalatable. Other no-no’s include caffeine, tobacco, and alcohol, which cause semen to taste even more bitter than it already is.

It’s important to bear in mind that the effects of these dietary changes won’t occur overnight, or from one meal to the next. (So if your partner is looking for a BJ tonight, eating pineapple slices before popping into bed with you won’t do the trick.) It can take days or even weeks for the semen to start to finesse its flavor. But when it does, thought, it just might make your sexual experience (and his swimmers) a whole lot sweeter.