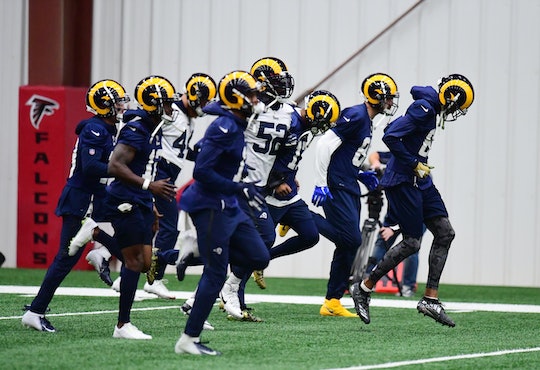 What Do The Roman Numerals Stand For In Super Bowl LIII? It's Easy To Figure Out

Super Bowl traditions come in all forms: face-painting the team colors; parties featuring wings and 10-foot subs; office grid pools where you can win good money for picking the right box; ignoring the actual game and turning up the volume when the commercials come on. But there is one tradition that might have you puzzled: the use of Roman numerals to mark the year. What does Super Bowl LIII mean? And why do we use this system, anyway?

For the answer, we'll have to do a little history review. As LiveScience reminds us, the ancient Romans used just a few basic numeric symbols: I, V, X, L, C, D, and M. The first three were based on the time-honored method of counting on fingers, with I standing for 1, V for 5 (look at the shape your fingers make when you hold up one hand), and X for 10 (imagine a V standing on top of an upside-down V). The origin of the higher numbers is a little less clear, although it's thought that L came from a Greek symbol, explained ThoughtCo. Whatever the backstory, L has always stood for the number 50.

Keeping in mind that Roman numerals read from left to right, and that you add the numbers together when the numerals to the right are smaller than the one on the left, LIII is the same as 50 + 1 + 1 + 1 — in other words, 53. So we're celebrating more than half a century of gridiron competition. (Think of how many buffalo wings have been eaten in that time. Whoa.)

Even so, why do we use an ancient system for numbering a sports championship that's only been around since 1967? As the Associated Press explained, the credit goes to former Kansas City Chiefs owner Lamar Hunt. Hunt, who was influential to the league and to the Super Bowl itself, felt that using Roman numerals made the game feel "more important," said Chiefs historian Bob Moore.

There's also a practical reason behind the decision. The Super Bowl is played in the calendar year after the regular season, so the game we're watching in 2019 is the final competition of the season that began in fall 2018. Numbering the championship rather than the year helps avoid confusion.

The Roman numeral tradition began with Super Bowl V (that's "5" to us non-Latin students) in 1971, per the AP story, when the Baltimore Colts defeated the Dallas Cowboys. The four previous championships were retroactively named I, II, III, and IV, and the rest is history.

The only exception to the old-old-old-old-fashioned numbering system occurred in 2016, when the league switched back to the regular numeric system and used the numeral 50, explained Sports Illustrated. Seems that the NFL was worried about possible public confusion over a Super Bowl L. But the following year, things went back to normal with Super Bowl LI (51).

In case you want to dazzle your friends with your Roman numeral knowledge, next year's championship will be known as Super Bowl LIV, which is pronounced "54," not "live." After that, things will proceed with LV, LVI, and so on, until Super Bowl 60 in 2026, which will be written as LX.

Those of us lucky enough to make it to the year 2066 will witness history as the NFL celebrates the 100th anniversary of the Super Bowl. Will they call it Super Bowl C, or will they go with the more-familiar 100? Only time will tell.

A word of caution: A little bit of Roman numerology goes a long way. When you send your Evites, it's fine to say "Come hang with us and watch Super Bowl LIII." But adding that your viewing party is taking place on II/III/MMXIX is just overkill. Just say, "February 3, 2019," set out your party platters, and chill.