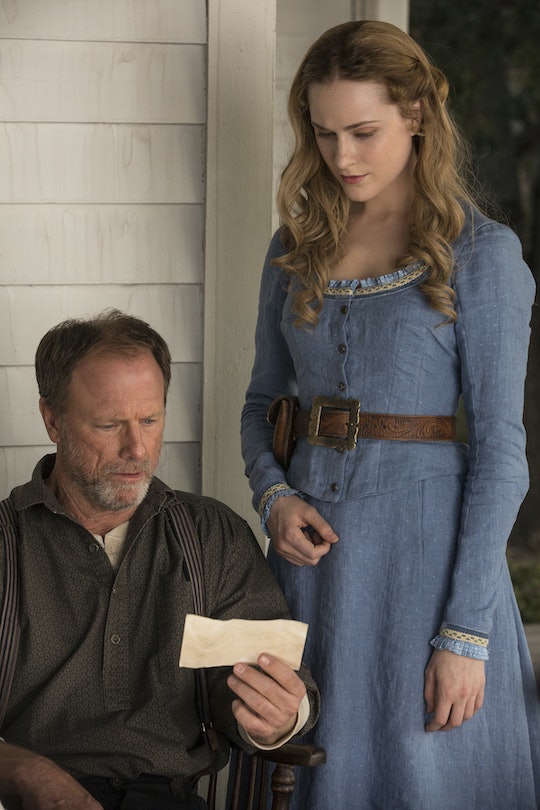 What Does "Violent Delights Have Violent Ends" Mean On 'Westworld'? It Can't Be Good

One of the most important things to happen in the series premiere of Westworld was Dolores Abernathy's father finding the photo on his farm of a woman standing in Times Square. After staring at it all night, confused and intrigued, he whispered something to Dolores, frightening her, but what does violent delights have violent ends mean on Westworld? Finding the photograph was important because it's part of what seemed to cause the glitch for him and that glitch in the program is what started the chain reaction among the other androids. But what does the cryptic phrase mean?

Although it's already been mentioned twice on Westworld, the line is taken from Act 2, Scene 6 of Romeo And Juliet, when Friar Lawrence is advising Romeo against marrying Juliet so soon after meeting each other, and trying to warn him of the dangers of rushing things and moving too fast too soon. Part of what he tells Romeo is: "These violent delights have violent ends. And in their triumph die, like fire and powder."

The first line is obviously the most important, as it pertains to the show, but what does "Violent delights have violent ends" mean on Westworld? It's obviously going to be important as the season goes on.

After Dolores reveals to Ashley Stubbs (Luke Hemsworth) what her father had whispered to her, we learn from Ford that the host playing her father in the current story line had previously been used The Dinner Party, another story line within Westworld, where he played a cult leader known to quote different famous pieces of literature, including that of Shakespeare. This is what Ford chalked the phrase up to, but it is more than likely meant to mean something much bigger.

The whole point of the amusement park of Westworld is to satisfy the desires of every guest who pays the hefty price of entry. On the website itself, we're told that no desire or fantasy is too taboo or off limits for the guests, but what if it's their desires or their "violent delights" that are going to be the end of the park itself?

Most of the androids, including Dolores, who is the oldest one of all, have been through countless narratives, playing different characters on a loop, but as we're starting to see, having all of these different programs and scenarios running for these androids is piling up in their stored memories, causing them to malfunction in their current roles.

Violent delights are the purpose of Westworld, where guests can shoot and kill whatever hosts they want and end the day at the brothel above the saloon, with any hired woman they want. But all of these attractions, so to speak, for the guests, are what's going to lead to the downfall of Westworld as the hosts become increasingly self-aware.

The "violent ends" that result from everything the park is built for is likely going to be the hosts turning on the creators or the guests themselves, or even both, as things come to a head. When Dolores's father started obsessing over the photo when, like her, he was supposed to brush it off, that was a huge clue of there being something much more to the hosts than being walking, talking computers. While Ford's explanation of the host's words being part of a previous narrative could have been true, they also decided to shelve that particular host below the company, where all of the inactive hosts go for storage.

The line "Violent delights have violent ends" on Westworld is the clearest form of foreshadowing, as much as it was in Romeo And Juliet, since as we all know, death and sadness resulted from the fast, passionate, and impulsive love between the title characters. On Westworld, the phrase more than likely refers to the eventual downfall of the creators' control over the hosts and, as a result, the downfall of their control over Westworld as a whole.