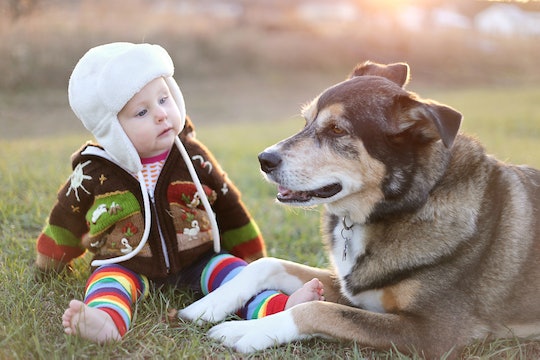 What Generation Will 2019 Babies Be? Because They Already Have A Name

Like every single generation before, everyone speculates about the newest generation and how they'll be "ruining everything" and "killing industries" like dining chains, cereal, and "breastaurants," which to be honest, thank god for that last one. Since the Earth is now inhabited with members of the Silent Generation, Boomers, Gen X, Xennials, Millennials, and Gen Z, what generation will 2019 babies be? And what will they be like (according to speculation from the generations before them, anyway)?

Of course, as per usual, there are tons of articles and "experts" talking about how this newest generation is doomed and will ruin everything, just like those pesky millennials. And of course, this generation has already been given a name: Generation Alpha. A term first used by sociologist Mark McCrindle, according to Flux Trends, Generation Alpha "applies to children born between 2011 and 2025," and "an estimated 2.5 million alphas are born globally every week." (That's a lot of alphas.)

Beyond producing an impressive number of offspring, millennial parents will praise that offspring too much, according to Forbes. Their children will also be “overindulged” because “generation Alpha are the one element in their parents’ stressed-out, multi-tasking lives that captivate their attention.” The article suggested this is why millennial parents will take their kids’ recommendations on what to buy and quickly. Another article, this one on Scary Mommy, claimed that Generation Alpha seems to need immediate gratification, as the writer is living with a 5 year old and knows first hand. (But maybe that’s because they’re 5? I’m not sure.) The author theorized that they have this need because everything is “OnDemand” and “on demand,” literally. Everything is instant access. No waiting like their parents had to for LimeWire or Napster to illegally download music, or sitting by the radio all afternoon on a Saturday to record their favorite song on a tape when the DJ finally played it. They also never had to wait for the internet to literally “dial up," and they have thousands of TV shows and movies at their fingertips thanks to Netflix, Hulu, Amazon Prime, and OnDemand, etc.

But it’s not all bad. The Scary Mommy article reminded me that at least they’ll probably be more inclusive than generations before. Millennials care about what businesses and people are doing to give back. They tend to not care about sexual orientation or genders and they like to let people do their own thang. The “Gen Z” kids are “more concerned with individualization and carving out personalized experiences in the world. Those students from Parkland are the true embodiment of that generation, forcing conglomerate corporations to reevaluate their ethical agendas and scaring politicians who can be swayed by a lobbyist’s large check,” the article noted. And because Generation Alpha has their parents to look up to, maybe they’ll be even better. That’s the goal for everyone who has children, right? In fact, a New York Times article noted that their parents are older, more diverse, have a smaller family size, are slightly wealthier (in some cases), and have a longer life expectancy, so perhaps they’ll have a good groundwork for being ethical (very technologically savvy) people.

Since you can’t talk about Generation Alpha without thinking about and acknowledging how technologically advanced they’ll be, the New York Times article suggested we call Generation Alpha “Generation Glass” since they are introduced to screens at such a young age and use them as “education aids” as well as entertainment. Their lives are quite “tech-intensive,” the article noted. And there's yet another name for Generation Alpha, too: Interesting Engineering referred to them as the iGeneration, since they won’t know and can’t imagine life without the iPhone, iPad, etc.: “They are not afraid of technology or touching buttons to learn what those buttons do. Alphas learn by doing."

So it looks like Generation Alpha, the next generation, will be some technologically savvy, kind-hearted, inclusive people as a whole, and they’ll likely end up teaching their moms and dads how to control text messages with their minds. And hopefully, they’ll use their technological and social media smarts to make the world a far better place than it is now.