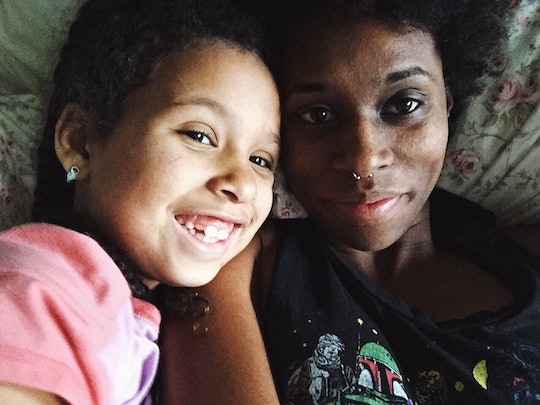 I love Harry Potter. More than I love a lot of things. I've read and re-read all of the books. I participate in the online world of Pottermore, and I've been counting down until the Wizarding World makes its way to the West Coast. I don't have any tattoos, but once I finally am brave enough to get one, I'll be getting the Marauder's Map on my arm. Harry Potter helped define my youth, and so it was only natural that when I had children, they'd want to sit and watch the films and read the books with me. I was holding off on the books until they were a little bit older, but when the casting for Harry Potter And The Cursed Child was announced and I read they'd cast a black woman as Hermione Granger, I realized that time was now.

My daughter is 7, and my son is about to turn 6. Some may argue that they're still to young to understand the intricacies of the story, but I'd argue that there's no time like the present. My children read non-stop and comprehend at grade levels way above their own. They've been begging me to start the series with them, and news that Hermione Granger would be played by a black actress has made reading together all the more important. Because they're still so young, my children have yet to take note of the fact that so many of the characters they love in books and even cartoons are not written to reflect their experiences. Even when skin color isn't specified, we read characters white. As a black woman and a self-proclaimed nerd who loves comic books, sci-fi, and fantasy novels, my own options for representation tend to be very rare. My children's? Even fewer.

In the books, Hermione's only descriptors are her teeth and her bushy brown hair. There's no implication that she is white or black or brown, save for one small passage in The Prisoner of Azkaban:

They were there, both of them, sitting outside Florean Fortescue’s Ice Cream Parlor — Ron looking incredibly freckly, Hermione very brown, both waving frantically at him.

Most read the character of Hermione as white. Because there is no descriptor that says, quite blatantly, that Hermione is black, we assume that she is a white woman. Emma Watson, the phenomenal and wonderful actress who played Hermione Granger in the movies, was white.

But now Noma Dumezweni will transform Hermione for a whole new generation of readers — and doing so will mean the world, if not more, to my daughter and me.

Black women should not be limited to background roles. We should have the opportunity to be the heroines. I want my daughter to be able to read about a heroine and to find herself in her. I want her to know and believe that the lead role isn't just a possibility, it's a definite. I don't want to her to always search for other ways to connect a character — bravery, wit, knowledge, strength — yes, those are wonderful, extraordinary qualities, but I want my daughter and my son to see their likenesses in the beloved books and shows and movies they love. I want their experiences reaffirmed. I want their stories told.

When I first heard the news, I couldn't help thinking:

Visibility in literature is an important thing. Since the dawn of time, books and writings have instructed and shaped the ways in which we view the world, each other, and our experiences. Books have guided us emotionally, pragmatically, mentally. They are the driving force behind so much of what we do. Imaginations are built on the pages our favorite authors have written for us; creativity woven into the words that dance before us. I don't want my children to have to pretend there are characters written for them. And now there is one less reason to pretend. One fewer question to ask. Because today my daughter and so many other black girls and their mothers have been given Noma Dumezweni. And that is powerful.