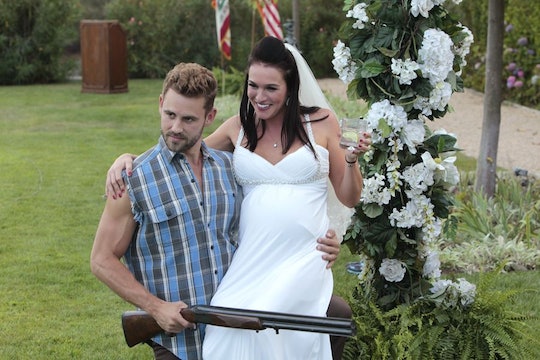 Alexis may have put her dolphin training dreams on hold to be on TV, but now that filming is over, what is Alexis doing after The Bachelor? Shark Girl definitely made a fast impression on Nick and viewers everywhere when she showed up in a shark costume that she claimed was actually a dolphin. (It wasn't.) But she had a very good reason for that. Other than getting the proper amount of screen time and gaining the Bachelor's attention, Alexis dressed up as a shark/dolphin because she had listed her profession as "aspiring dolphin trainer." This was also when she was fresh out of college, presumably without a set job in the works yet. So does this mean Alexis has fulfilled her dreams now that The Bachelor is over? Or is she doing something else entirely?

The Bachelor contestant, a New Jersey native, recently made a move to Miami. Was this in order to be closer to warmer, dolphin-friendly water? That has yet to be determined. However, you can't help but notice that this also just so happens to be the home of the Miami Dolphins, which could indicate that Alexis's dolphin training dreams were part of a bigger joke throughout the season. Then again, maybe she really does want to work with dolphins in her career and the move to a state with a dolphin football mascot was just a happy coincidence. Either way, though, it seems like Alexis is doing what she does best and literally spending all of her time having a good time and living life to the fullest.

Shortly before Season 21 of The Bachelor started shooting, Alexis graduated from Montclair State University and at 23, she's definitely one of the younger contestants this season, so it's totally understandable if she hasn't found her career groove yet. For most of the Bachelor and Bachelorette contestants, it's in their contracts to be able to travel for interviews and show-related promotions for months following the end of the actual show, so maybe she's just biding her time and will continue on with her dolphin aspirations at a later date.

As it stands, though, viewers don't know if she left the house with a ring on her finger, but at the very least Alexis left The Bachelor with some legitimate new friends. She recently posted a photo in South Beach with Whitney from this season of The Bachelor and while it's unclear if the two reunited for promotional purposes or just for fun, it's still always reaffirming to know that these women form real bonds while competing for the same man.

And if Alexis is just taking her time to become an actual dolphin trainer instead of an aspiring one, that's cool too. But I would be lying if I said I wasn't totally behind the idea of getting Alexis on Bachelor In Paradise. Having her on the next Bachelorette is all well and good, but BIP lends a certain humor to itself that Alexis would fit right in with.

When you're 23 years old and just spent several years in college and then a few months filming The Bachelor, you are absolutely allowed to take some time to figure out what you're doing. Alexis has been embracing the Bachelor culture and doing what she does best by keeping things light. Have we told you lately that we love you, Alexis? Please never change, regardless of whether you win this thing or not.