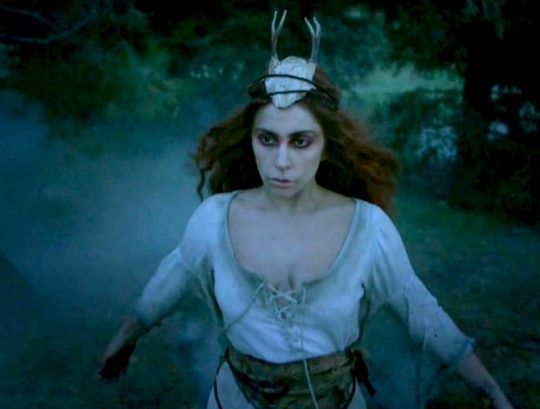 What Is Lady Gaga's Name On 'American Horror Story'? Her Character Has An Interesting Past

Since before Season 6 of American Horror Story even premiered, fans were curious about who Lady Gaga would play this time around. She absolutely killed it (pun intended) last season as The Countess, so expectations were high. Naturally, they brought Gaga's character out in a sneaky way, not bothering to give us her backstory until Episode 4, but it was well worth the wait as we learned about her ancient beginnings. So what is Lady Gaga's name on American Horror Story? We may have seen snippets of her mysterious character in the first few episodes, but in Episode 4, we finally heard her name. Even then, though, it was hard to make out without the closed captions on. Luckily, everyone else thought so too and it's even been officially changed on IMDB from Witch of The Woods to Scathach.

OK, so the name Scathach is kind of a mouthful, especially in a world of Matts and Shelbys. But Gaga's character on AHS goes back a lot further than the 16th century colonists she runs with today. When we learned about the past of Scathach, we learned that she was born an English girl who was also said to be a descendant of the Druids, who traveled to America by way of being a stowaway on a ship. She was eventually found on the ship and held prisoner. Which is when, as all of us who have seen Episode 4 know by now, she kind of turned.

Scathach lured one of the guards to her cell and stabbed him, in the neck, and then proceeded to kill all of the other soldiers until she was left standing, covered in blood, and free. And now, her main goal seems to be getting busy with Matt any chance she gets. But why, exactly, is this big bad's main goal something as simple as sex?

In Scottish lore, Scathach was a warrior who trained men to fight and turned them into strong warriors. She was also sometimes known as the Celtic goddess of the dead, as she was said to have possessed magic and have the power to make sure that those who were killed in battle were able to pass on. Obviously on AHS, Scathach isn't all about training warriors at the moment, but we've seen her clear link to the dead, as she appears to be leading all of them, including The Butcher (Kathy Bates), who is merely her speaking tool.

In the Scottish stories about Scathach, she lived on the Isle of Skye, where she held a fortress that was nearly impenetrable. But when one warrior managed to, she allowed him in to train him in exchange for help making peace with a neighboring island, whose female ruler was said to be Scathach's sister.

In the story, the warrior impregnated her sister in the process, but since AHS is its own story, they might be switching things up a bit. As in, Gaga's character on AHS might be the one to be impregnated, in this instance, by Matt, which is why she needs to sleep with him so badly. During this time of the moon phase, it may be her only chance to, which is why she's so intent on hypnotizing and seducing him.

Regardless of her motives, though, Gaga on AHS has continued to excite fans, who already loved her but became even more obsessed when she basically took the place of Jessica Lange last season. And obviously she's doing her part to fill that void.