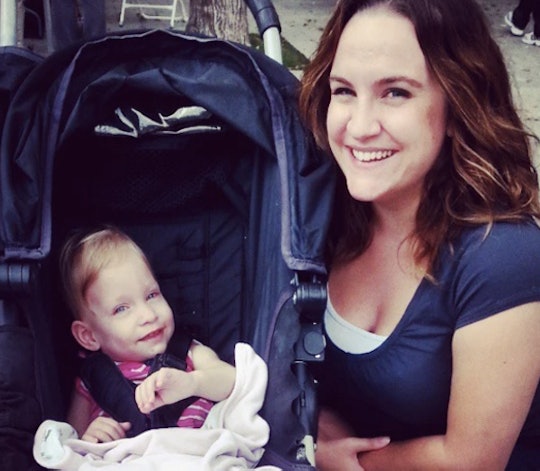 What My Daughter Has Taught Me About My Own Body Positivity

Being a mom of 3-year-old twins means my daily life is pretty chaotic. I feel overwhelmed a lot of the time, and so caught up in things like making meals and taming tantrums that there isn't always a lot of time for actually being present in motherhood. But when I stop to really think about it, the truth is that there are so many other important things to consider than just the day-to-day stuff. Am I raising kids who have a decent shot at becoming kind, well-adjusted people who feel like they have supportive parents? What kind of mother do I want to be to them? What kinds of things do I want to model? Teaching my twins to be body positive is something that I've always thought was important, but these days, I find myself repeatedly caught off-guard by how difficult that actually is, especially as a mother of a little girl. Being Madeleine's mother makes me think about all of the unchallenged assumptions I've held about things like beauty, weight, and body image, and it's also made me want to try that much harder to fight against those assumptions. She might never know it, but my daughter has taught me about my own body positivity — and that's a really good thing.

I often think that having boy/girl twins puts me in a pretty unique situation to really walk the walk when it comes to raising kids without adhering too heavily to gender roles. After all, I am raising both a boy and a girl at the exact same time, so it's been easy to shy away from things like "girl toys" and "boy toys" for example — at 3 years old, my son still has no idea that things like dolls or purses or jewelry or pink glittery whatever are most often thought to be for girls, and I hope that lasts as long as possible. But I'd be lying if I said I didn't struggle to raise them as unburdened by this stuff as possible. The reality is that the older my daughter gets, the more I feel my own insecurities bubbling up, and the more I have to fight not to project it all onto her shoulders.

At the end of March, I was caught by surprise when, during what I thought was just a routine, mostly-unnecessary checkup, Madeleine was diagnosed as having mild cerebral palsy (CP). Madeleine and her brother Reid were born extremely prematurely — at 25 weeks gestation — and Madeleine had a difficult medical journey as a result, so it's not like the CP diagnosis came entirely out of left field. But getting the official label felt scary and sad, and everyone who loves Madeleine was a little bit thrown by it. Even though that diagnosis was quickly identifiable by most people as Bad News,and it was easy for other people to understand why I was struggling with it, there was another concern raised during that appointment that wasn't as easy for me to discuss.

I'm almost ashamed to admit this, but in that moment, I couldn't have cared less about the fact that my daughter had cerebral palsy. All I could think was that Madeleine would be even shorter than me, and my heart totally sank ... And then, the worst part of all, I thought to myself, "well for her sake, I hope that she can at least stay skinny."

Madeleine is a tiny little girl — only 24 pounds at 3 years old — and so monitoring her growth on the regular has always been important. Even though it's not entirely surprising that she is small (I was also a small child, and we were both born prior to 30 weeks gestation, which can affect things like height and weight), when the doctor plotted her measurements on the growth curve, the results were a little jarring. Given my and my husband's adult heights, and then adjusting an inch or two for Maddie's prematurity, it's reasonable to think that she'll grow to be around 5'2" or 5'3" one day. Still kinda short, sure, but I'm only 5'1," so, you know, you gotta work with that.

However, he doctor's brow furrowed slightly as she looked at the chart:

You know Alana, the thing is, given the data we have for Madeleine so far, she's not even projected to reach 5 feet. And that makes me think that perhaps we should be assessing to see if there is something affecting her growth.

I'm almost ashamed to admit this, but in that moment, I couldn't have cared less about the fact that my daughter had cerebral palsy. All I could think was that Madeleine would be even shorter than me, and my heart totally sank. I knew, of course, that it was unlikely that Madeleine was going to defy her genetics and medical history to become some 6-foot-tall runway model (although I will admit that I hoped for it anyway), but I at least thought that she'd be a few inches taller than me, and that she'd never have to be the butt of someone else's short joke, or feel like shopping for clothes was much more of a chore than it had to be. I thought about all those statistics that say tall people are considered more attractive and are more likely to be successful. And then, the worst part of all, I thought to myself, "well for her sake, I hope that she can at least stay skinny."

Trying to raise children in a world in a culture that sees being fat as pretty much the worst thing you could possibly be is a minefield. I want to let my kids know that whatever they look like is OK, but what do I do with the reality that most people wouldn't agree that it actually is? If people aren't openly shaming others for being fat, they're making backhanded comments about how concerned they are for their health, as though that means absolutely anything. And, more importantly, what do you do when you don't even really agree — that even though you honestly believe that everyone deserves to be accepted however they happen to be, the one person that doesn't actually apply to is yourself?

My daughter unknowingly challenges in me all the things I don't like about myself, and that has shown me how much work I have left to do if I really want to be a body positive role model like I say I do.

In the days following that appointment, I mentioned the doctor's concern over Madeleine's height to a friend of mine, who also has a young daughter. When I admitted my personal sadness about this on Madeleine's behalf, she said,

Honestly, I don't think of you as short. It actually has literally never crossed my mind. When I see you in person I'm not like, what a tiny person. I don't even notice.

Hearing her say that actually felt incredibly surprising. I'd always imagined that it was something that stuck out about me, like some kind of neon sign saying "short person." Then I began to wonder how many other seemingly blatantly obvious things about me don't even register on other people's radars. Does anyone realize that my nose is crooked? That my right eyebrow never looks even no matter how carefully I shape it? That my calves are too muscular? That there's a line on my forehead I cannot wait to Botox the crap out of?

And then I thought about Maddie. Sweet, beautiful, perfect little Maddie, who is currently oblivious to any and all body criticism, but who will — far sooner than I would like — begin to learn from the world around her that there are things "wrong" with her and that she should feel bad about them. I might not be able to stop that from happening, but I could at least try to mitigate the intensity. And, more than anything else, my goodness, I do not want to be the one instigating the entire thing by taking my own hangups and making them hers, just because she happens to share my DNA.

As my son grows, I worry that he too will be hurt by the ridiculous messages both boys and girls receive about what they should look like and who they should be. But because he and I don't look or act particularly alike, it's much, much easier for me to separate myself from him, and see him for who he is. But my daughter unknowingly challenges in me all the things I don't like about myself, and that has shown me how much work I have left to do if I really want to be a body positive role model like I say I do.

If I could help it, I still think that I would wave my magic wand and make it so that Madeleine could grow to be a woman with perennially-shiny hair, perfect skin, and the body of supermodel, purely because I'd like her to have as few reasons as possible to think that there's anything unattractive about herself. But the truth is it's probably best that I can't do that, because it means that she'll have the opportunity to learn that what she looks like really doesn't matter as much as we'd like think it does, and hopefully that everyone deserves to accept and love themselves just as they are. Plus, I'll always find her breathtaking, because I know and have seen what's in her heart. And for me, it means that I'll have to work even harder to overcome my own body image biases, so that one day, just maybe, if someone asks Madeleine how she learned to be so comfortable in her own skin, she'll be able to say, "I learned it from my mother."