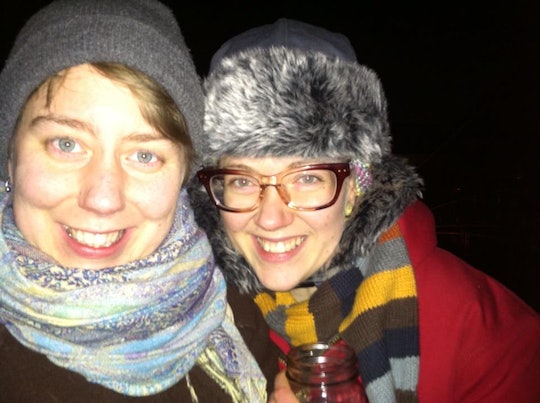 I am living proof that it is possible to have the queer family of your dreams, even when you come from a homophobic place. I live in a red state, I’m married to another lady, and we have the most perfect baby in the universe. No seriously, he’s the best (unless you also have a baby, in which case coincidentally yours is also the best). We’ve managed to navigate homophobia surprisingly well, in part because of other privileges we have. Still, it isn’t always easy or simple to be a queer lady in a place where you aren’t always welcome, and that is further complicated by having a child. Sometimes parenting as queer in a homophobic state affects our day to day lives, and other times, it doesn’t, but ultimately, a lack of legal protections and acknowledgement has played a very real role in the ways that we live, parent, and attempt to thrive.

When my wife and I began thinking of starting a family together, I honestly wasn’t totally sure what to expect, given the political climate where we live in Michigan. There has definitely been negativity that I expected — we had a child before same-sex marriage was even legal in our state, for one thing. We have also, however, run into a surprising amount of support, from our families, from our community, and even from perfect strangers, which has ultimately made all the difference in the world.

When my wife and I got engaged, same-sex marriage was still very much not legal here in Michigan. We weren’t getting married for legal recognition, so we went ahead and planned a big, weird, queer wedding without the state’s involvement. As we made our announcements to the people that we love, we quickly learned two things:

Somehow, almost a decade after a very well publicized (and successful) push to define marriage as one man one woman in our state constitution, many straight people were shocked and appalled to learn that same-sex couples were still prohibited from a legally recognized marriage. Their surprise was confusing to me, but their subsequent outrage, often times from people I didn’t expect, was heartening. It also led to a lot of conversations about what my wife and I think marriage is and what it should and should not mean. I don’t think I would have enjoyed such chats with great uncles and Southern grannies if I had been straight and my marriage had been straightforward. (See what I did there?)

When I went into the hospital for a c-section, we were counting on the hospital itself to allow my wife in for the operation, even though legally she wasn’t allowed.

But the show of support from our families did not come without its own set of challenges from a state and government level. Since the Supreme Court ruling this summer, gays can now legally marry in Michigan. That’s good news for a lot of people, but let’s not forget, it took the Supreme Court to get our homophobic government to finally roll over and let us participate in such threats to “traditional family values” as filing our taxes together. The wait totally sucked, for us and for lots of other families. And at the time, because we didn’t have a marriage certificate, if we had chosen to adopt or add children to our family, we wouldn’t have been unable to do so together.

The wait for legal marriage was extremely frustrating in a variety of ways and negatively impacted many queer families. For almost two years, I had to mark “single” on any official paperwork even though I was anything but. We’ve had to file taxes separately even though we’re a family. Most importantly, when I went into the hospital for a c-section, we were counting on the hospital itself to allow my wife in for the operation, even though legally she wasn’t allowed.

But even more importantly than that, we are still waiting on very basic legal protections. We still don’t have any protection whatsoever from employment or housing discrimination, making the lives of many LGBTQA+ people living at or near the poverty line (hi, that’s us!) pretty scary.

Even so, it’s still an exciting time to be a queer family. My son is going to grow up with a lot more security and acceptance than I had imagined. We had a second wedding this summer, for legal purposes, at our Buddhist temple. Although I had expected it to be just a formality, it was so much more than that. It was beautiful and magical. There were people there that I didn’t even know, but after the ceremony they thanked us for sharing such a special day with them.

I can’t wait until my son is old enough to talk about these things, and I can show him the pictures from both of our weddings. We’ll tell him why we had to get married a second time, and how happy we were to finally have some legal rights and protections, and how much it meant to us that he was there for it.

Because neither of us is a woman taking a man’s last name, our legal name change is a huge mess and inconvenience, as well as a financial burden. It’s such a mess that it’s still not completed. Also, in order for my wife to legally have parental rights at all, she needs to go through the second parent adoption process, which is lengthy and confusing. So even though we have a fancy marriage certificate now, in order to exist in the world and have the legal protections that we need (and deserve), we need a lawyer.

People in my community are not just OK with the fact that my wife and I had a child, they are proud of us. They lift us up. I can’t tell you how many times, during my pregnancy and around the birth of our child, we were told we were inspiring others. It feels good to be loved.

In case it wasn’t already obvious: Lawyers cost money. Money we don’t have. So even though we have more rights than we did prior to legal marriage, we’re still navigating a frustrating and exhausting system that straight people just don’t have to deal with. As it stands, we get by primarily using institutions that are queer friendly (which is a huge privilege). But if, say, our pediatrician’s office decided to crack down on legality issues, my wife wouldn’t even be able to take our kid to the doctor without me.

That said, one of the greatest joys that have come from parenting in a homophobic state has been the fact that we are not alone. People who face oppression band together because they have to in order to survive. That need itself isn’t great, but the result can be amazing. Obviously I cannot speak for every queer community across the state, but the queer community my family has been a part of is absolutely incredible. People understand what we’re are facing, and we all support one another the best we can, whether that’s forcing spaces to be more inclusive, walking home with a friend who feels scared, or just giving someone space to vent. There is a wide variety of identities represented, and a real effort to be more and more inclusive of marginalized people. We grow stronger in the face of adversity.

I see this benefit other LGBT people around me, but it also directly benefits me. People in my community are not just OK with the fact that my wife and I had a child, they are proud of us. They lift us up. I can’t tell you how many times, during my pregnancy and around the birth of our child, we were told we were inspiring others. It feels good to be loved.

The support and love from others facing our same struggle has been indescribable, but tthere’s no anti-discrimination legislation regarding sexual orientation or gender identity on the books in Michigan. It’s made the need for community all the more important. As people, we can be discriminated against everywhere, and the law is on the side of the discriminators. That means that we can be turned down for housing because we are gay. That means we can be fired from our jobs for even seeming gay.

Because my wife and I are white and able to appear middle class through dress and demeanor when we want to (even though we are far from it), our relative privilege sometimes insulates us from these realities. But not all the time, and that certainly isn’t so for everyone. While looking for housing this past fall, we knew very well that potential landlords could and would turn us away simply because we’re gay. That fear — especially because we had a child – that we would have a place to live one day but wouldn’t be guaranteed one the next was crippling.

Shortly after our wedding, my wife and I took our honeymoon in Michigan’s Upper Peninsula. It's very rural, very conservative, chunk of land. We love nature, so it was great to get out of the city, but I also found myself getting kind of nervous about our obvious gayness. I am an aggressively out, flamboyant homosexual. But there I was, at a rest stop in the middle of nowhere, momentarily thinking, “maybe it’s best if we just don’t hold hands” on my honeymoon! I was the most nervous when, after camping for three nights, we decided to get a motel room on the fly. We were driving all day, and finally stopped at motel for the night. We went in to register for our room and the owner asked “king-size bed or two queens?” My stomach tightened, but I said “king” and she didn’t bat an eye. And neither did anyone else that whole trip. I was a bit surprised that we didn’t run into any trouble at all (remember the billboards!), but maybe I shouldn’t have been.

Michiganders can be extremely friendly and kind, and people who met us along the way typically just wanted to know where we had been, where we were going, and were we having a good time? I told them yeah, we were having a great time. And despite the hardships, we still are.