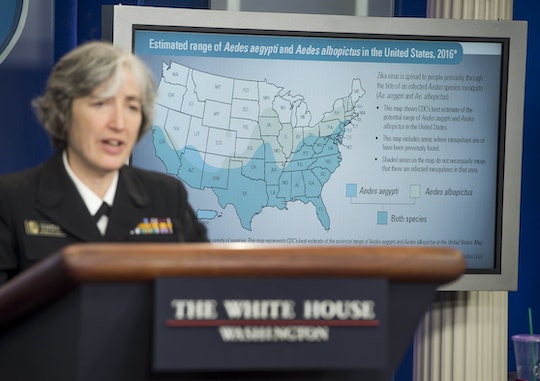 What States Can The Zika Mosquito Live In? More Than You Might Think

Don't be too alarmed, but if you've been scrolling over Zika virus headlines all winter, it might be time to inform yourself. As explained by the Centers for Disease Control recently, the Zika mosquito can live in more U.S. states in the than you might have previously assumed. (Cue a collective groan.) It's just one more thing you needed to worry about, right?

Sort of. Zika-carrying mosquitoes are expected to disperse throughout North America as the weather gets warmer, moving from the tropical and sub-tropical climates of South and Latin American into the southern United States. Right now, the CDC has predicted that the Aedes aegypti and Aedes albopictus, the two types of mosquitoes that can spread the virus, will be able to survive throughout most of the country.

The Aedes aegypti, according to the CDC, has a pretty impressive estimated range, capable of living in most of the southern states like Florida, Georgia, North and South Carolina, Mississippi, Louisiana, Tennesee, Kentucky, and Arkansas. CDC officials also estimate that the pesky bug may eventually reach Oklahoma, Texas, Arizona, New Mexico, and southern parts of California. Lest any Northeast corridor folks start to feel smug, the bug is headed north, too. The CDC maps show West Virginia, Virginia, Delaware, Maryland, and parts of Pennsylvania and New Jersey as getting some of the run off. The question is not where can the insects live but where can't they live.

Before you start encasing your home in mosquito nets and buying mass quantities of DEET off of eBay, take heed. The threat of Zika is real, but the CDC maps are not a depiction of the actual spread of the virus — it's just where health experts predict the mosquito can live, especially as summer nears. Some other good news is that the Aedes albopictus, or the mosquito depicted in the green map on the right, feed on animals as well as people, and they're apparently less likely to spread Zika to humans. The Aedus aegypti, or the ones depicted on blue map to the left, feed on just us humans, so that's the one to really take issue with.

Both maps show where the mosquitoes can survive, but are not accurate depictions of the amount of mosquitos already known to the area nor instances of an outbreak. It's like the CDC is saying, your sister could move to Nashville and become a country pop star, but it's anyone's educated guess right now as to the likelihood of that actually happening.

Just to run with that metaphor, imagine that the Zika mosquitos have already bought a a guitar and a plane ticket. Just like your hypothetical, ambitious, Miranda Lambert-loving sister, there's loads of evidence to show that Zika is likely to spread to the United States, but the scope of an outbreak still remains to be seen. So far, documented cases of Zika in the continental U.S. have been travel related, meaning that someone who was in a Zika infected country, like Venezuela or Brazil, came back with the virus. The locally documented cases in the U.S. have been in more tropical territories like Puerto Rico, the U.S. Virgin Islands, and American Samoa.

That doesn't mean that Zika is not a very big deal, especially if you are pregnant or planning to get pregnant very soon. While the symptoms of Zika may seem minor, the virus has been linked to various neurological and developmental diseases in babies where the mother was infected with Zika while pregnant.

There are lots of ways to protect yourself, such as heeding the CDC travel warnings and protocol for getting tested for Zika if you think you have been exposed. There's also a current request from the Obama administration for emergency Zika funding that's up for debate in Congress, and which you can support, in order to help others who might be at more of a risk than you are.

Knowing that you might live in an area where the mosquito could be buzzing around is half of the battle. Unlike that hypothetical little sister with Nashville dreams, Zika carrying mosquitoes are most definitely on the move. How "successful" those bugs will be is up to everyone else take precautions and prevent the spread of the virus throughout the summer.