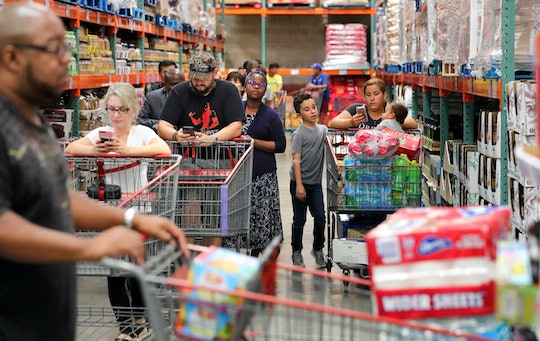 Here's When Costco Opens On Black Friday, Because You'd Better Get There Early

After the table has been cleared and all the dishes are done on Thanksgiving, your thoughts might turn to Black Friday. And you might begin to wonder when some of your favorite stores are opening their doors for those amazing deals. If you’re curious what time Costco opens on Black Friday, well, you and your fellow croissant-obsessed customers aren't alone.

Unlike other retailers who are offering early bird shopping hours for Black Friday, Costco is keeping it real and sticking to its regular schedule. In fact, a quick call to Costco’s customer service number confirmed that Costco is closed on Thanksgiving and will conduct normal business hours on Friday. Which means that Costco will open at 9:00 a.m., as usual.

So here’s where it gets a little interesting. Although Costco is not going to be physically open on Thanksgiving Day, the store is offering select Black Friday deals online on Thursday. For example, you can score a Dyson Ball Pro+ Upright Vacuum for $100 off online starting on Thursday. Not really keen on cleaning? How about $250 off an Apple MacBook Pro 13.3 laptop? And if you have a hard time concentrating when the kids are around, the Bose Noise Cancelling Wireless Headphones can quiet the chaos — and they'll be $50 cheaper, too. Or if you want to get a jumpstart on those health-related New Year’s resolutions you’ll might make on December 31, set yourself up for success with the Proform Premier 600 Treadmill. It’s fit and has a very healthy $300 discount.

If you decide to brave the crowds and go to your local Costco, you’ll find other deals as well. Head on over to the electronics section if you want to see the biggest sales; if Santa has been, ahem, slacking a bit, he can get an Xbox One X 1 TB Console Bundle for $150 off (FYI: that deal starts on November 24, too).

Although Costco is closed on Thanksgiving, the important thing to remember is that some Black Friday deals start a day earlier online. So once you’ve taken your fill of turkey and fixin's, you can start shopping online on Thanksgiving and score savings until you’re stuffed.