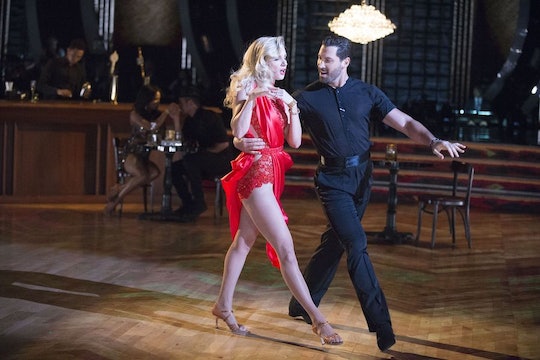 Throughout the first half of Season 24 of Dancing With the Stars, it seemed a given that Heather Morris would remain safe and outlast plenty of her fellow celebrities. So her elimination last week was not only disappointing, but surprising too. The actress will likely return to work soon, but what will Maks Chmerkovskiy do now after Dancing With the Stars?

The surprise elimination came directly after he was finally able to return following his calf injury and surgery from earlier in the season and he’d even managed to help Morris get her first (and the season’s first) perfect score. But even so, Morris was sent home and Chmerkovskiy is out for the season, so what is he going to do with all of his free time now? Before Season 24 began, Chmerkovskiy had actually said that he wouldn’t even be back once he became a father.

He and fiancée Peta Murgatroyd welcomed their son Shai on Jan. 4 and while Chmerkovskiy’s intentions had been to stay home with his son, he obviously had a change of heart and returned to the show to support and compete with his fiancée. But now that he’s off the hook, so to speak, Chmerkovskiy has plenty of time to spend at home with their new baby.

Chmerkovskiy wasn’t available to do the usual Good Morning America interview that typically follows the DWTS eliminations because of a issue with an intruder who was the past owner of his home, but as he told People, it was settled but he just wasn’t comfortable leaving his family after the incident.

The pro dancer hasn’t posted on social media since he and Morris were sent packing on DWTS Monday night, but directly after it happened he did talk to Entertainment Tonight about his feelings regarding the elimination. Despite being upset about what happened, Chmerkovskiy seemed mostly shocked more so than anything else. "Well, I mean we've had a few [surprising upsets] in 24 seasons of the show [but] I just never thought that that one of my [partners] was going to be a part of that shock," Chmerkovskiy stated. And really, he's not wrong.

But since his original plans were going to be about caring for and spending more time with his son, he’s likely going to take the remainder of the season to do that as he supports Murgatroyd, who’s currently paired with The Bachelor’s Nick Viall and still in the running. Morris’ elimination on DWTS is still such a shocker, but at least Chmerkovskiy was able to help her gain a perfect score so she could go out swinging.

Obviously his time on Season 24 is over, but since he’s been a staple of the show for the past several seasons, hopefully he’ll return again.