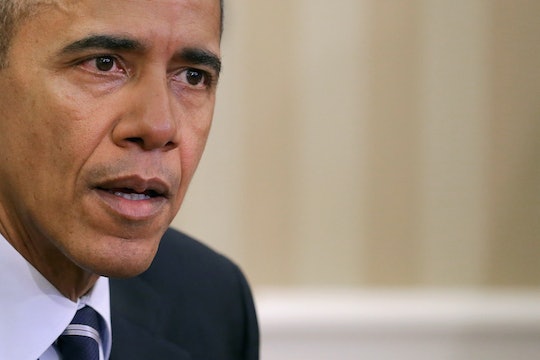 What Will Obama's Oval Office Speech Discuss? 4 Topics He Might Cover During The Rare Address

In the wake of the recent terrorist attack in San Bernardino, California that claimed the lives of 14 people, President Obama will address the nation from the Oval Office tonight to discuss terrorism the security of our nation. But the question remains: Exactly what will Obama talk about during his Oval Office speech? Based on a statement on WhiteHouse.gov, President Obama “will provide an update on the ongoing investigation into the tragic attack in San Bernardino. He will also discuss the broader threat of terrorism — including the nature of the threat, how it has evolved, and how we will defeat it.”

During Sunday's address, President Obama will once again assert the need for the dismantling of the Islamic State, which is currently at the root of many recent headlines, including the violence in Syria and subsequent refugee crisis, the terrorist attacks in Beirut and Paris, and the downing of a Russian plane over Egypt, all in the past few months. While ISIS/ISIL has yet to officially claim responsibility for the San Bernardino attack, many of their supporters have praised the tragedy on Twitter. A radio broadcast by the group solidified this connection by asking their supporters to honor the attackers as “martyrs.”

This is President Obama’s first Oval Office address since 2010 and only the third in his entire presidency. The last two addresses involved the BP Oil Spill in the Gulf of Mexico and the withdrawal of U.S. troops from Iraq.

There is a lot of speculation out there as to what the particular points of tonight’s speech will entail, and what President Obama should address.