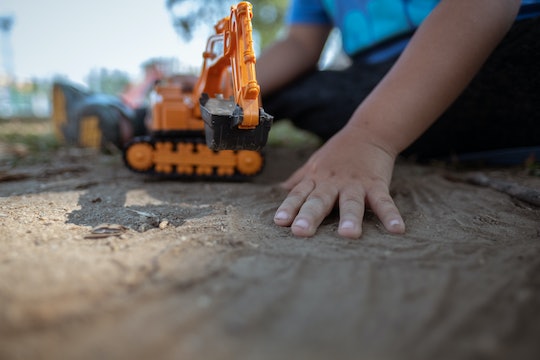 If you've ever spent time near a sandbox, you've seen the thunderdome style fights over the construction trucks and toys, specifically the diggers. There's something in those yellow excavating trucks that firmly captures the imaginations of children, whether it's their perceived strength, their ability to cut through buildings and the earth, or just because kids just like filling buckets with sand. Diggers are an undoubtedly universally-appreciated piece of equipment, and what your kids' obsession with diggers says about their brains will probably not surprise you.

For years, it was assumed by developmental scholars and parents alike that playing with construction trucks and diggers was primarily the occupation of boys. While there might be some gender-identity variant in toy choice, recent studies have found that it is likely not inherent to the children, but rather a reflection of their parents' notions of gender-appropriate play and a result of gender-specific packaging, according to a study published in the journal Appetite. This is key because scientists have found that what your kids' obsession with diggers says about their brains is that they're eager to increase their spatial and mathematical problem solving skills through the act of discovery, according to the Parenting Science website. There is no toy perhaps better suited for discovery than something that literally digs underground, exposing layers of earth to the curious mind.

Think about what diggers do. To kids, they're the representation of possibility and power. Not only do diggers work their way through the hardest materials that children interact with on a daily basis, they're also complex feats of engineering and physics. Children are forced to grapple with the idea that a small cabin of a truck, on giant, rolling wheels, is somehow able to work a long arm that terminates in a powerful bucket that fills with heavy rock and stone, and the cabin remains upright.

Educators value this ability to manifest in a visual metaphor.

"Little ones love big trucks like diggers because to a preschooler, those trucks seem larger than life," Crystal Paschal, early childhood educator and founder of Feminist Books for Kids, tells Romper.

"They are real machines that do the work of superheroes. Diggers, bulldozers and cranes stimulate their imaginations and allow them to picture themselves controlling something big and powerful."

The website Parenting Science explained that this fascination with construction and engineering is beneficial throughout children's lives, noting that if we "want kids to develop an intuitive grasp of mechanical forces — like the forces of tension and compression — construction play offers excellent learning opportunities." Diggers are all about balance and discovery. That aspect of balance helps kids intuit the issue of a body's center of gravity far better than their own toddling legs and bodies have served them so far.

Often, diggers are used in the process of gardening, both as toys and the use of the trucks themselves. Researchers at Michigan State University found that the act of exploring the outside and gardening — digging in the dirt and planting — permits children to unearth the mysteries below the surface as well as triggering their brain to promote small and large muscle growth: "They will be moving their bodies using large muscles and using muscles to balance and manage objects."

This obsession with diggers is so strong, that it's not limited to what children can see and experience out in the world. Popular shows like Bob The Builder, and Chuck and Friends, feature the large construction vehicles, and yes, there's an app for that.

Dr Caroline Moul from the School of Psychology at Sydney University, co-director of the Sydney SEEDling Lab (which researches the brains of children aged from 3 to 12) told Babyology that your kids' obsession with diggers might have an evolutionary aspect to it. She said that these big trucks almost feel like they have a life of their own to the children, stating “If you think about a truck [with] big headlights, they look a bit like eyes. It moves, so it looks like it has its own agency." Watching children play with diggers, or watching them observe diggers in real life, it is easy to see how they would anthropomorphize the large vehicles. As Moul said, “So for all you know, children are actually thinking about trucks in a very similar way to how they think about animals or dinosaurs. They're a moving object that does interesting stuff."

There is so much going on in your kids' brains as they interact with diggers that it's no wonder they're so obsessed. They're everything from a master of discovery to a mechanical dinosaur. They're more than mere fascination, they're an instrument of learning and imagination.