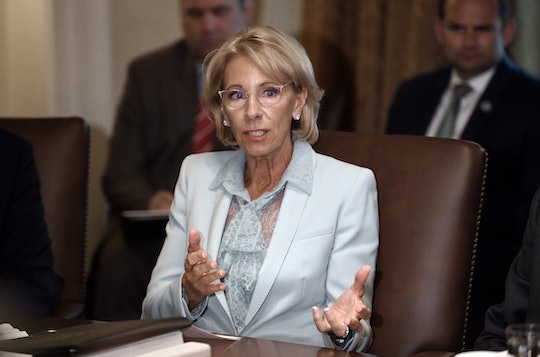 Many parents are aware of H.R. 610 — aka the "Choices in Education Act of 2017" — an education bill that was first introduced to the House of Representatives in January 2017. The bill falls in line with Education Secretary Betsy DeVos' views about school choice, as it proposes to implement a voucher program that would theoretically give parents the opportunity to homeschool their kids or send them to private schools. But critics of the bill argue it would limit the U.S. Department of Education's ability to distribute federal assistance to schools, which would lead to the decline of public schools across the United States. And considering there's a long list of concerns and questions about the proposal, it's understandable that parents out there are wondering what's happening with H.R. 610 at the moment.

Iowa Rep. Steve King sparked a major debate about education when he introduced H.R. 610 the House of Representatives on Jan. 23, 2017, just one month before DeVos was confirmed as the Secretary of Education. The heated public discourse wasn't too surprising given the bill's questionable goals, one of which is to repeal a rule that sets nutritional standards for national school lunch and breakfast programs, according to HuffPost.

H.R. 610 also proposes to establish "an education voucher program, through which each state shall distribute block grant funds among local educational agencies (LEAs) based on the number of eligible children within each LEA's geographical area," according to the Library of Congress.

From those amounts, each LEA would "(1) distribute a portion of funds to parents who elect to enroll their child in a private school or to home-school their child, and (2) do so in a manner that ensures that such payments will be used for appropriate educational expenses," the proposal goes on to summarize.

If you haven't worked in education or aren't well-versed in the complicated subject of educational funding, this bill probably sounds incredibly confusing, especially since it's marketed under the guise of school choice.

Essentially, this bill would likely have disastrous consequences for public schools. As for why? Well, if a lot of parents decide to homeschool or send their kids to private schools based on these vouchers, public schools would lose students as a result. And without students to fill these schools, they'd receive less funding. Without funding, public schools — especially those that are already struggling — suffer greatly. From reducing the number of teachers and staff to cover budget costs to slashed services (think after-school programs), there are many ways in which this proposal could hurt public education.

Oh, and did I mention the effects H.R. 610 could have on special education? The bill aims to repeal the Elementary and Secondary Education Act of 1965, a statute that guarantees "equal opportunity for all students," according to the U.S. Department of Education. Without the ESEA, special education centers lose funding, for example, and it limits the department's ability to give grants to schools in need. Translation: special education students would likely lose important resources to help them succeed, like one-on-one instruction and other necessary accommodations, if the bill passes.

It's also important to note that the bill doesn't make any mention of special education.

DeVos already tried out the bill's troubling ideas in Michigan, a move that didn't end up so well. If you Google "DeVos and Michigan," you'll be treated to tons of articles about how DeVos' intervention was a bust, like "DeVos' Michigan schools experiment gets poor grades," or "Michigan schools 'on a race to the bottom.' Is Betsy DeVos to blame?"

In light of all of the concerns (trust me, there are a lot) about the bill, it's reasonable parents want to know what's up with H.R. 610 at the moment. And the answer is, not much.

If you check out the handy dandy website called Gov Track, you'll notice the bill hasn't moved an inch since it was first introduced in January 2017. Considering it seems like at every twist and turn bills (and political appointments, for that matter) are being pushed down the throats of the American people at warp speed these days, I'm a bit surprised this bill is seemingly at a standstill.

But just because this bill appears to be a standstill, it doesn't mean parents should give up fighting for public education. Stay informed about the progress of H.R. 610, and talk to education stakeholders or teachers about how you can help support the public schools in your area.

And if you want your voice to be heard about this issue, contact your congressperson via telephone or email. You can find their information via the House of Representatives' website — just type your zip code into the search box and you'll be redirected to your representative's website with their contact info. If that doesn't work, call 202-225-3121 for assistance.