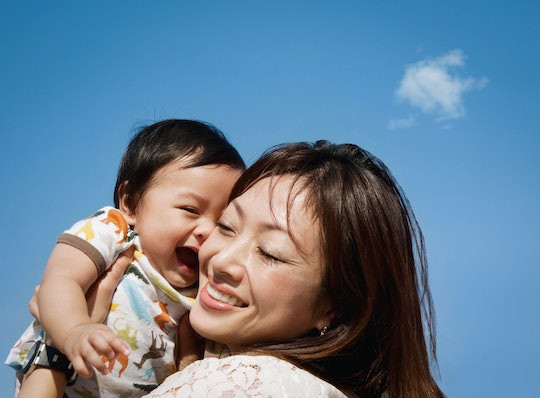 Set On Two Kids... Until They Had Their First

It wasn’t long after my daughter was born that well-meaning friends and family started asking the inevitable: " When are you having your second baby?" (To be honest, plenty of people even asked this question while I was still pregnant.) The truth is, I wasn’t sure if I wanted a second child even before my daughter was born — and that doubt has only grown exponentially since experiencing pregnancy, delivery, and the newborn phase.

More Like This
18 Best Sand Toys In 2021 For Babies, Toddlers, & Kids
30 Vintage Photos Of Parents Giving Their Babies A Bottle
Is The Tooth Fairy Real?
The 7 Best Water Tables For Your Little Ones

Objectively, there was nothing horrible about my motherhood journey. I didn’t develop any pregnancy complications, and my daughter was healthy at birth. We were sent home after a standard two days in the hospital, and any subsequent pediatrician and postpartum appointments were all status quo. On paper, I should have nothing to be afraid of.

And yet, the idea of having another baby feels like hitting the proverbial reset button, and it’s overwhelming. It feels like returning to the beginning of a long and harrowing story — one where my body doesn’t belong to me for nine months or longer. The thought of the endless doctor’s appointments, morning sickness, worrying about every little thing, all of the aches and pains that our minds might forget but our bodies never could — it’s exhausting just to even consider.

Of course, that’s only the beginning, the first chapter. It’s not just pregnancy, labor, and delivery that gives me pause, but it’s the newborn stage — that endless stretch of darkness where it’s always 2 a.m. and sleep feels like the most foreign concept, never to be achieved again. My daughter was born at the beginning of September, and there are parts of that autumn that I can’t even remember. I lost chunks of time to sleep deprivation, an entire season spent wearing sweatpants and a messy bun, surrounded by unwashed clothes, dirty dishes, and the ever-present mantra that it just has to get better than this.

And get better it did; my daughter is 18 months old now, and I love every second of being her mom. The toddler phase has its own set of challenges, but it’s been nothing short of incredible to watch her personality develop, to learn what makes her laugh, what her passions are, and who she might become. In many ways, I feel like I’ve made it out of the trenches now; sure, there are still bad days, moments of sheer frustration and exhaustion, but nothing like the beginning. I’m making memories now; back then, it felt like I was just simply existing.

For moms with postpartum depression (PPD) or other perinatal mood and anxiety disorders, these feelings can be even more intense. Rachel, 29, tells Romper that she had always wanted a big family, but after being diagnosed with PPD, she quickly changed her mind. “It was the worst time in my life,” she says. “It felt like I was being assaulted by my brain, I couldn’t stop obsessing about all the horrible things that could happen to my baby. I was just overwhelmed and sad and so alone.”

Fortunately, Rachel had a strong support network of close friends and family who lived nearby. “I told my best friend and mom what was happening, and they suggested I tell my OB-GYN, and I did,” she explains. “I was able to get help, and I made it through, but it changed my perception of motherhood forever. I don’t want to go back to that, because I felt like it made me a bad mother. I don’t want to put myself or my family through it again.”

But PPD, which affects up to 1 in 7 new mothers, according to the American Psychological Association, isn’t always a deterrent when it comes to expanding one’s family. Kayla, 38, was diagnosed with PPD after the birth of her son in 2011, but worked closely with her therapist in order to prepare for her second child.

"I was terrified,” she tells Romper. “I was afraid that it would be just as bad, or worse. But in some ways, it was easier the second time because I had something to compare it to, and my husband knew what I had been through. We were just ready to fight the demons, I guess.”

After all, with the right amount of treatment, postpartum depression doesn’t last forever. Lauren Hasha, a licensed professional counselor in San Antonio, tells Romper that “mental illnesses like postpartum depression are certainly treatable,” adding that the symptoms can be temporary and are treated in a variety of ways including “talk therapy with a trained professional as well as medication to help with anxiety and depression.”

Hasha notes that, in some instances, hospitalization could be necessary for the safety of both the mother and the baby, emphasizing: “The most important thing to do is have a close and honest relationship with your medical and mental healthcare professionals. Remember that postpartum depression is not your fault and is not a value judgment on the type of mother you are.”

For Kayla, the desire for a bigger family outweighed her fear of potentially returning to a dark place. “We just always wanted two kids,” she explains, adding that they imagined a family of four on vacations and couldn’t let go of that vision. “I felt like I’d regret it, later in life.”

And that “big picture” mentality is often what gives me pause, too. I think a lot about that 2013 Gwyneth Paltrow interview in People where she recalled advice from her best friend’s mother: “Don’t do your planning around the pain in the ass of infancy, because it’s so finite. Plan it around how many people you want at Thanksgiving.”

It’s true, in a way. Pregnancy, delivery, the newborn stage — all of it is finite. This too shall pass, I know. But it’s still the better part of two years, which isn’t nothing. To dismiss those dark times simply because they will end is to undervalue a woman’s time, her body, her agency. I’m not sure I want to lose another two years, and I think it’s OK to admit that.

Libby, 42, agrees. “It was such a lonely period,” she tells Romper, adding that she was diagnosed with PPD after the birth of her daughter. “I felt like no one knew what I was going through, no one could understand. I love [my daughter] tremendously, but I also love myself. I think that’s important for people to understand… it’s hard because everyone wants to think about the children they could create, but mothers can and should think about themselves, too.”

And that’s truly the bottom line. A mother’s well-being and mental health matters, and sometimes that means altering the dreams you once had for your family or embracing a new reality. After all, in order to be a good mother, we have to take care of ourselves.

If you or someone you know is experiencing depression or anxiety during pregnancy or in the postpartum period, contact the Postpartum Health Alliance warmline at (888) 724-7240, or Postpartum Support International at (800) 944-4773. If you are thinking of harming yourself or your baby, get help right away by calling the National Suicide Prevention Lifeline at 1-800-273-8255 or dialing 911. For more resources, you can visit Postpartum Support International.