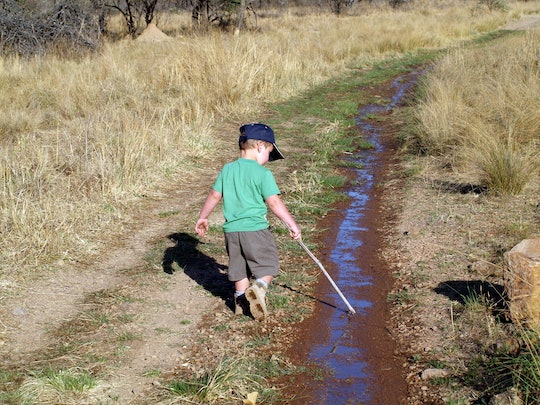 Turns Out, Sensory Processing Disorder Can Be Diagnosed Earlier Than You Thought

There isn't a child alive who doesn't occasionally resist hugs or throw a tantrum over wearing a particular shirt. But if your kid regularly wiggles their way out of a cuddle session, becomes upset over loud or high-pitched noises, or is slow to react to situations that would otherwise typically draw a response — like water that is too hot or cold — then you may be dealing with sensory processing disorder (SPD). It's not always easy to pin down, is sometimes confused with autism, and can mimic some toddler-like behaviors. So when can you diagnose sensory processing disorder?

"Parents can notice red flags of sensory processing disorder as early as the infant and toddler stages," Ginger Jones, a pediatric speech-language pathologist, tells Romper in an email interview. "Some of these red flags early on are dislike for being dressed, dislike for being held or cuddled, trouble with eating or sleeping, and/or an inability to calm themselves beyond the newborn stage."

Jones explains that as children approach preschool age, some red flags are an oversensitivity to touch, sounds, and smells, as well as difficulty with transitions. She says children may also appear clumsy or weak. "School-aged children may exhibit the same sensitivities, as well as be easily distracted or overwhelmed," Jones notes. "They may also have trouble with handwriting and fine-motor tasks such as dressing."

Researchers estimate that sensory processing disorders affect 5 to 16 percent of school-aged children who feel like their senses are in overdrive, according to a study from the University of California San Francisco. "Children with SPD struggle with how to process stimulation, which can cause a wide range of symptoms including hypersensitivity to sound, sight and touch, poor fine motor skills, and easy distractibility," noted the study.

If a parent does think their child may be affected by SPD, then Jones says the next step is to meet with an occupational therapist. "During the assessment process, a parent can expect to be interviewed about the child's behavior and responses in a variety of situations," she says, adding that a diagnosis can be given as early on as the infant and toddler ages. "Depending on the age of the child, there may be standardized assessments given."

While ADHD and autism have symptoms that overlap with those related to SPD — including being non-verbal, low to no social skills, avoiding eye contact, and unusual mood or emotional reactions — each condition falls into its own category, according to the STAR Institute for Sensory Processing Disorder.

Once you do receive a diagnosis, it's important to formulate a plan with your child's school and begin implementing certain methods within the home, according to Understood. You may want to try tracking your child's behavior and avoiding certain noisy tasks — like running the vacuum — that you know will irritate them.

As for the journey, many parents of kids with SPD say that, while the road can be difficult, it can also be traveled. As Lee Hayden wrote of her 6-year-old son, "We always have to be ready for the unexpected. We live on our toes, ready to move and adjust and react. Though it's been incredibly tough on me, I know that my son's happiness is what matters most."

And that's something every parent can relate to.

More Like This
34 Instagram Captions Perfect For Preschool Graduation Photos
21 Magical Shows & Movies About Unicorns
How A Recall Of Contaminated Formula Made The Formula Shortage Crisis So Much Worse
Can You Help Your Baby’s Hair Grow?