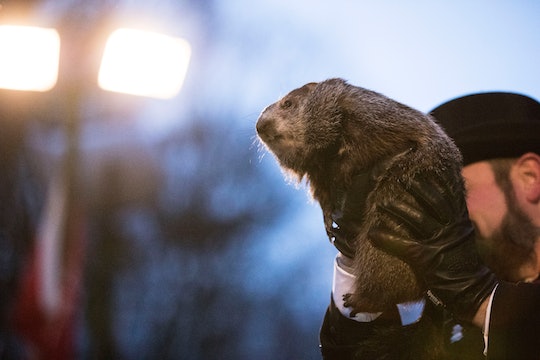 When Is Groundhog Day? The Furry Dude Is Gearing Up To Make His Yearly Forecast

The holiday lights are down, the trees are bare and drab, and Mother Nature is socking a chunk of the nation with snow, ice, and brutal cold. 2019 has barely begun, and already we're longing for springtime. That's why so many of us are looking forward to the famous holiday that promises pleasanter days ahead. So when is Groundhog Day 2019? Warm-weather fans everywhere (myself included) want to know.

Simplicity lovers can rejoice over this one. As holidays go, this one's a lot easier to remember than Thanksgiving, Easter, Passover, Ramadan, Lunar New Year, or any holiday that shifts dates from year to year. Groundhog Day always falls on February 2, affirmed Office Holidays, regardless of the day of the week. This year, the second falls on a Saturday, allowing you to celebrate as you like and still catch some extra sleep in the morning.

The 2/2 celebration predates the rodent-watch by many hundreds of years, according to the History Channel. February 2 is the midpoint between the December winter solstice and the March spring equinox, and the pagans called it Imbolc. As with other pagan holy days, the day took on religious significance when the early Christians renamed it Candlemas, and observed it as the day in which Mary presented Jesus at the temple in Jerusalem. In church, congregants would bring candles (a symbol of hope and the "light of the world") to be blessed. It was also the time when farmers began to plant crops, in anticipation of warmer weather to come.

As often happens with traditions, Candlemas took on a new meaning as folks connected the day to the weather, noting that it tended to get milder sooner when February 2 was overcast, and stay frigid when the skies were clear. The Punxsutawney Groundhog Club website quotes an old English folk song: If Candlemas be fair and bright, Come, Winter, have another flight; If Candlemas brings clouds and rain, Go Winter, and come not again.

With that superstition in mind, folks in Europe started looking for the appearance of hibernating animals such as hedgehogs and bears, explained Office Holidays. When Germans immigrated to Pennsylvania in the 1700s, they brought the tradition with them... and started keeping an eye out for a hibernating critter common in that area: the groundhog.

The Groundhog Day tradition as we know it here began in (yes!) Punxsutawney, Pennsylvania, in 1886, when a group of friends hiked to a site called Gobbler's Knob in search of a groundhog that would foretell an early spring or a long winter. That set the stage for an annual tradition that now lasts three days, attracts thousands, and inspired the iconic Bill Murray film Groundhog Day.

Spoiler alert: Punxsutawney Phil, the best-known Groundhog Day forecaster, isn't all that accurate; since 1887, he's seen his shadow more than 100 times, and the National Oceanic and Atmospheric Association calls Phil's predictions iffy at best, according to Hudson Valley Magazine. He's not even the only rodent meteorologist out there: Cleveland.com names 20 other groundhogs that give their take on the future of winter, from Chattanooga Chuck in Tennessee to Sir Walter Wally in North Carolina to Staten Island Chuck in New York City.

But no matter which groundhog's predictions you follow, you can have fun celebrating Groundhog Day in a number of ways. Get up early and watch the coverage of Punxsutawney Phil (or the groundhog of your choice) emerging from his burrow. Then make a holiday treat like the groundhog pancakes from the Simple & Seasonal blog, and settle the family down to watch Groundhog Day or the lesser-known TV special Jack Frost. (It features Buddy Hackett as a groundhog named Pardon-Me-Pete, who helps the lovestruck Jack Frost extend winter by pretending to see his shadow.)

Most of all, remember that February 2 is a reminder that the dreary and cold days are halfway behind us, and that the beauty of the next season isn't too far away. It'll give you a boost of hope, which we all need during the darkest days.