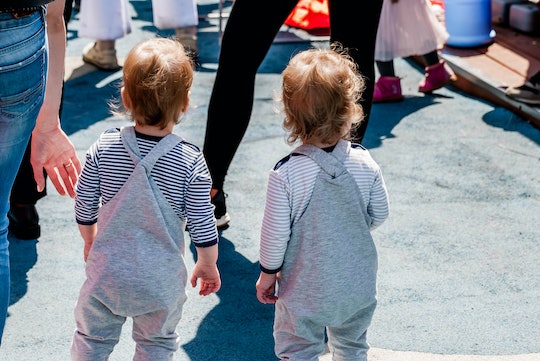 National Twin Day 2019 Is Almost Here, So Get Ready To Double Your Fun

The other day a visibly pregnant stranger and I were both standing at the hostess booth in a restaurant, waiting to be seated. We struck up a conversation about her pregnancy (which I find myself doing a lot because I write about pregnancy for a living, as long as I am absolutely sure that person is pregnant, like the only other option is that they have a beach ball under their maternity shirt). She told me she was pregnant with twins. This was especially timely, as National Twin Day is August 3 this year. Twiiiiiiins! I heard my voice audibly rise in pitch in response, coming from some primal part of myself that responds to cute things like mini cupcakes and dollhouse furniture.

There is something so universally fascinating about twins, especially for those who grew up on a steady diet of Mary Kate and Ashley. In honor of the day, I have you covered with everything you need to know about National Twin Day, plus some fun twin facts so you can wow people with your mastery of twindom — you know, beyond the fact that the Olsen twins' birthday is June 13th, which, thank goodness is a steel-trapped piece of knowledge in my brain, though I currently can’t remember where I sat my coffee down or if I watered my plant yesterday.

National Twin Day was inspired by twins Mose and Aaron Wilcox. In 1819, the pair donated six acres of land and $20 to the town of Millsville, Ohio with the stipulation that the town change its name to Twinsburg, according to the Twinsburg Chamber of Commerce. These twins were not messing around. In 1976, the town held the inaugural Twin Day Festival, and while only 37 sets of twins attended that year, according to Cleveland.com, 2000 registered sets of twins attended the festival in 2018.

This rising number speaks to the overall trend of twin births steadily increasing in The United States. As a 2015 article by CNN reported, the birth twin rate reached a record high in 2014 (little data has been published since) with 33.9 twins born for every 1000 births. For context, the twin birth rate in 1980 was 18.9 per every 1000, which is a pretty major increase in just 34 years. Part of the rise is due to an increase in IVF treatments and part may be attributed to people having children at a later age. 7 percent of all births were a twin delivery in women ages 40 and over, compared with just 2 percent of twin deliveries in women under age 25, according to reporting done by Very Well Family.

This means more twins in the world, and more reason to celebrate National Twin Day. Considering there is a National Day devoted to “lumpy rugs”, celebrating National Twin Day is really the bare minimum we can do to honor these people who had limited womb real estate. It's said that by 18 weeks in utero, twins touch each other more often than they touch their own bodies, which is all too relatable for parents who are constantly touched (read: grabbed, pulled, accidentally punched) by their kids.

If you can’t book a ticket to Ohio to attend the twin festival, which will be held from August 2 through August 4 this year, you may want to watch a movie about twins, or read some amazing twin stories. Maybe learning some twin facts (brought to you by the Huffington Post) is more your style, because you never know when Alex Trebek will announce that the category is multiples and it will finally be your chance to shine. To whet your appetite for twin knowledge (I know you just can't wait), here are a few of my faves:

Another idea? Ask a parent of twins if you can watch their duo while they celebrates the day... alone, with a book, clutching a mimosa. Look, everyone gets to choose their own twin day party, okay?