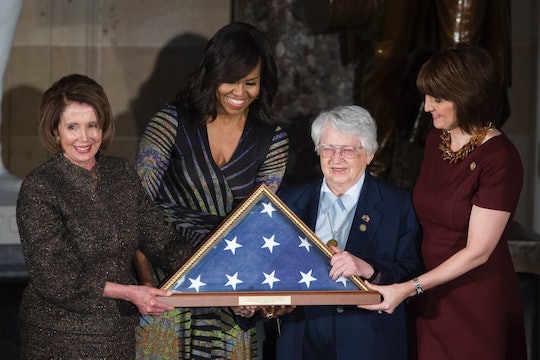 Women's History Month Is Almost Here, & This Year's Theme Is So Inspiring

Honoring women is something we ought to be doing in one form or another every day of the year, but we actually have an official 31-day period in which to do so loudly and proudly. National Women's History Month is almost here, and it's the perfect time to read up on both famous and unsung heroines throughout the ages so you can acknowledge the role women have played in the making of history both here and worldwide.

The National Women's History Alliance (the organization formerly known as the National Women's History Project) selects a theme for each year's celebration, and showcases the women who helped advance that cause. Last year's theme was "Nevertheless, She Persisted," and the Alliance honored 15 heroines who fought discrimination against women. Among them was Margaret Dunkle, who spearheaded the Title IX law barring sexual discrimination in schools; groundbreaking vice-presidential candidate Geraldine Ferraro; pioneering abortion activist Pat Maginnis; and civil/women's rights activist Pauli Murray.

The 2019 theme for Women's History Month is "Visionary Women: Champions of Peace and Nonviolence." As the National Women's History Alliance website explained, "This year we honor women who have led efforts to end war, violence, and injustice and pioneered the use of nonviolence to change society."

In keeping with their tradition, the Alliance has selected 15 living and deceased honorees this year, who will be acknowledged at a ceremony in Washington, D.C., on March 30. The women include Graciela Sanchez, co-founder of the Esperanza Peace & Justice Center; Deborah Tucker, president of the board of directors of the National Center on Domestic and Sexual Violence; Dr. E. Faye Williams, human rights activist and president/CEO of the National Congress of Black Women (pictured below); Sarah Brady, the late gun control activist and champion of the Brady Bill; and Peace Pilgrim, who logged thousands of miles in her cross-country marches for peace before her death in 1981.

So what can you do to honor Women's History Month in your own home? Plenty. A variety of women-centric suggestions listed in a Bustle article included such ideas as writing a letter to a woman who has inspired you; watching speeches from this year's Women's March; taking a badass friend out to lunch; learning more about an historical woman; donating to a women's organization such as NOW; or buying menstrual supplies for a women's shelter.

It's also important to educate our children about the place of women in history. It wasn't all that long ago that school history textbooks made almost no mention of women's contributions. Things have changed in recent years, but not as significantly as they could have changed. History of Art, considered the gold standard of art history books, contains only 15 female artists in its 800 pages, according to an article in Artsy. And in Texas, the state board of education voted to eliminate Helen Keller and Hillary Clinton from history textbooks in the interest of saving time and memorization, reported Dallas News, while keeping Billy Graham and local members of the Texas Legislature in the texts.

With March just around the corner, you have time to plan for ways to honor our gender's place in history — whether by educating yourself, teaching your children, attending an event or museum, or celebrating the amazing women in your life (including yourself).

More Like This
13 Organizations Doing Incredible Work For Moms, Babies, & Families
How Many Elves Does Santa Have?
How To Make Santa Footprints
The Best Last-Minute Gifts For Grandparents