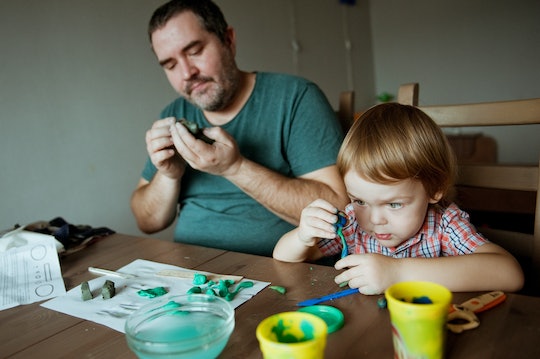 So Do You *Have* To Throw Out Play-Doh When It Starts To Get Weird?

Some kids' toys last forever, like heavy-duty wooden blocks. And some seem to break the minute you get them. But then there are toys whose lifespan is, well, unclear. Like Play-Doh. It doesn't break, but it does start to harden. And what if something starts growing on it? It can be tough to tell what to do. When should you throw out old Play-Doh?

Some say that Play-Doh will last "forever" if kept in an airtight container. But I'm not sure those people have kids. Or maybe their kids are just tidier than mine. My kids leave the Play-Doh sitting out. And sometimes I clean it up right away, and sometimes I don't get to it immediately. And even if my kids did put it away the second they were done, the Play-Doh is still out in the air while they're playing with it. So, even the company that makes Play-Doh knows that eventually it's going to get dried out. And dried-out Play-Doh is no fun. It's hard to work with, and it gets crumbly, so your creations fall apart. But, dried Play-Doh does not need to be thrown out. Fortunately, this is the easiest Play-Doh problem to solve. Hasbro, the maker of Play-Doh, explains: "To restore the softness to Play-Doh compound, try adding water one drop at a time and working it in to moisten the Play-Doh compound. You can also try wrapping the Play-Doh compound in a damp paper towel, returning it to the container and replacing the cover. Let it sit overnight."

But what if it's not just dried out? What if your Play-Doh has stuff growing on it? Then it's time to pitch it, right? Well, not necessarily. It depends on what's growing.

If your Play-Doh has been sitting for a long time, it may develop crunchy-looking, whitish patches, often in round or lumpy shapes. Sounds gross, right? But it's probably completely harmless.

Play-Doh is made primarily of water, salt, and flour. As it dries out, the water evaporates away. Leaving the salt behind. So, if your Play-Doh has crusty, whitish "growths" on it, congratulations. Your kiddo just grew some really cool salt crystals. Some people pay a bunch of money for a crystal growing kit, but you just made one for free. Show your kid the cool science they just did. And, even though it might look totally ruined, this crunchy Play-Doh is just dried out. So there's no need to throw it away. Just follow Hasbro's instructions, and you can bring it back to life.

But what if the Play-Doh has grown something that's fuzzy, or soft, or has other colors on it? Well, then you've probably got mold. And it's time to let it go. If new colors like grey, yellow, green, or pink are showing up on the Play-Doh, that might be a sign of a fungus. Probably not a toxic, disease-causing kind, but, still, go ahead and pitch it out.

Now, if your Play-Doh has grown mold, I'd hazard a guess that your Play-Doh might be the homemade kind, which is less likely to have preservatives in it. But, if you are making your own play dough, you can add your own food-safe preservatives like cream of tartar, recommended the Research Parent website, to keep this problem at bay.

Play-Doh is a pretty simple product... mostly water, salt, and flour. So there's not much to go wrong... with the Play-Doh itself. But then we go and give it to kids. Which means just about everything can go wrong. Here is a short list of other times that you really should just throw the Play-Doh out.

More Like This
Can Elderberry Help Prevent Illness In Kids? Doctors Weigh In
Tips For Apple Picking With Kids
What Is RSV?
20 Toys You Don’t Want To Miss From Amazon’s Top Toys List Of 2022