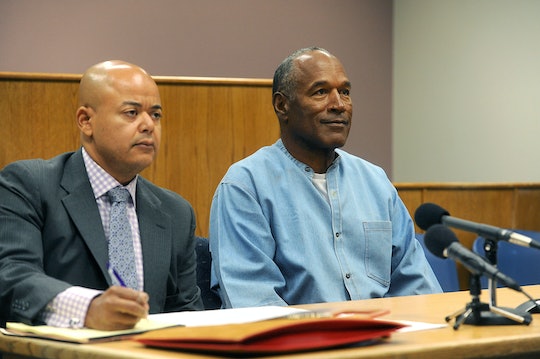 When Will OJ Simpson’s Parole Hearing Be Decided?

On Thursday, former NFL star O.J. Simpson appeared before the Nevada Parole Board to request early release from his current nine to 33 year sentence. When will O.J. Simpson's parole hearing be decided? While many legal experts feel that Simpson has a strong possibility of being granted parole, the possibility exists he could be denied parole. Either way, Simpson's parole decision could come as early as today — but according to a few specific factors, may be delayed for as long as at least six months, according to CNN.

Simpson's parole hearing is being heard by four members of the Nevada Parole Board. Simpson himself was not present at the hearing; he and his lawyer appeared via video conference from Lovelock Correctional Center in Nevada. According to the operations of the Nevada Board of Parole Commissioners, "The results of the Board’s deliberations will not be announced until four members are in agreement."

At approximately 2:20 p.m. Eastern, Connie Bisbee, chairman of the Nevada Board of Parole Commissioners, offered the following as Simpson's hearing moved into a brief recess, "We're hoping to deliberate, come to an agreement, and be able to produce an order sometime within the next 30 minutes or so," meaning that Simpson's parole hearing decision could be known as early as 3 p.m. Eastern. All of this comes down a unanimous decision to either grant or deny Simpson parole, as per the operation of the Nevada Parole Board.

If Simpson's parole hearing decision is not unanimous, Bisbee explained that two additional Parole Board Commissioners would be brought in for further deliberations. In this instance, Simpson only needs a simple majority instead of a unanimous vote, but if the Parole Board comes to a split 3-3 decision, then another parole hearing would be scheduled for six months from Thursday's hearing. If Simpson is granted parole, he could be released from prison as early as Oct. 1, according to NBC News.

As enthralled as the public as been about Simpson's parole hearing on Thursday, none may be waiting more anxiously for the Nevada Parole Board's decision than O.J. Simpson himself.