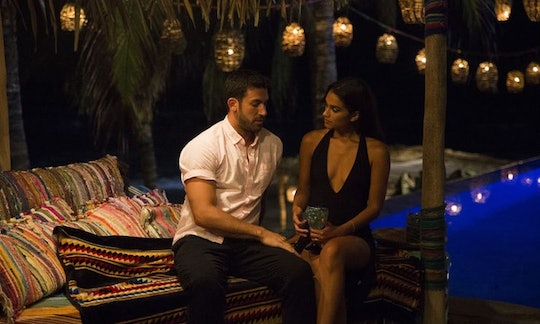 A Taylor & Derek Wedding Could Be Underway After 'Paradise'

Throughout Bachelor in Paradise Season 4, there were plenty of contestants you thought would hook up or make some kind of connection. But the one couple who stood out and continues to stand out from the season is Derek and Taylor. And since they might be the couple to get engaged on the finale, it’s kind of understandable to wonder when will Taylor and Derek get married after Bachelor in Paradise? The proposal could actually happen on TV and as soon as the after show following the Season 4 finale.

In the promo, it looks like there won’t be the usual engagement or two at the end of the finale, but instead at least one during the Bachelor in Paradise Season 4 after show which was taped on Aug. 30. So if Derek and Taylor are the ones who get engaged, the next big question is when their wedding will be. Usually, the engaged couples from Bachelor in Paradise usually wait a little while before getting married, if that big step does actually come for them. For Derek and Taylor, it could go either way.

Their relationship was formed early in the season and from then, they’d been inseparable as the strongest couple of Season 4. And since they both previously competed on The Bachelorette and The Bachelor, neither are likely afraid of committing to someone they haven’t known for very long. So really, Taylor and Derek’s wedding after Bachelor in Paradise could happen as early as next year, depending upon how eager they are to make it official.

If they are the couple who got engaged on the Bachelor in Paradise after show, the engagement itself is still pretty new to them and chances are, no wedding date has been officially set. But if they’re anything like Evan and Carly from Season 3, they’ll have no problem getting married on Bachelor in Paradise next season. Or Season 2’s Jade and Tanner, who got married the January following their season and allowed it to be televised as a Valentine’s Day special.

Of the few Bachelor in Paradise couples who are still together, the weddings were as much a part of Bachelor Nation as the beginning of their relationships were, so it’s probably not out of the question for Taylor and Derek to agree to a televised wedding or on-set in Paradise during Season 5. As individuals, both Derek and Taylor seem like the kinds of people who wouldn’t take a proposal lightly, so if Derek is the one who pops the question during the after show, they’re both more than likely in it for the long haul.