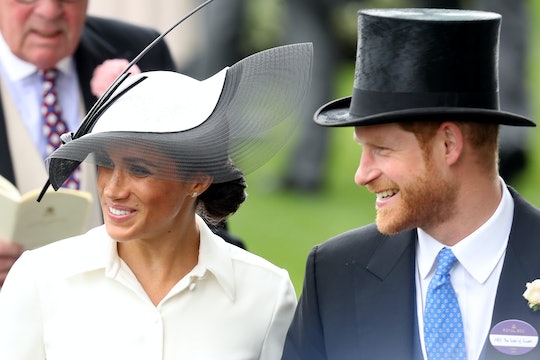 Meghan Markle Is In Labor, So Here's When We Could Find Out Baby Sussex's Name

As news broke today that the Duchess of Sussex had gone into labor and then welcomed with her first child with Prince Harry, royal fans across the globe still have lots of questions about Baby Sussex. For instance, when will we find out Meghan Markle's baby's name? If she and Prince Harry follow past royal protocol, here's what you could expect about learning the newest royal baby's moniker.

On Monday, May 6, Buckingham Palace confirmed to the media that the Duchess of Sussex had gone into labor earlier today. "The Duchess went into labour in the early hours of this morning," palace officials said in a statement, as People reported. "The Duke of Sussex was by Her Royal Highnesses’ side. An announcement will be made soon."

The statement continued, "Their Royal Highnesses’ son weighs 7lbs. 3oz.The Duchess and baby are both healthy and well, and the couple thank members of the public for their shared excitement and support during this very special time in their lives. More details will be shared in the forthcoming days."

Around this time last year, you might recall that Kate Middleton and Prince William welcomed their third child, Prince Louis. However, it took a minute before his name was officially revealed. On April 23, 2018, Kensington Palace first announced on Twitter that the Duchess of Cambridge "was admitted to St. Mary’s Hospital, Paddington, London earlier this morning in the early stages of labour." And roughly five hours later, the palace confirmed Middleton that had given birth to a baby boy.

But when did the world learn that baby boy had been named Prince Louis? That answer came roughly four days after Middleton gave birth. On April 27, 2018, Kensington Palace said in a statement on Twitter, "The Duke and Duchess of Cambridge are delighted to announce that they have named their son Louis Arthur Charles. The baby will be known as His Royal Highness Prince Louis of Cambridge."

So if Markle and Prince Harry decide to follow a similar protocol, they may share their baby's name within a few days' time. However, considering a rare statement made on their behalf earlier in April, it sounds like they're going to do things differently than the Duke and Duchess of Cambridge have done in the past when it comes to royal births.

With that said, it might be hard to predict when exactly these specific details will be announced. However, once Markle does give birth and she and Prince Harry have had some precious time together with their newborn as a family, royal fans may get to see them, and perhaps get some answers, a few days later.

As the Daily Mail's Rebecca English reported on Twitter earlier this month, Markle and Prince Harry "will facilitate a photocall around two days" after they've celebrated their baby's birth as a family.

It's unclear if pressing details such as the baby's name will be shared during this photocall, but if history tells us anything, we just need to hang tight a bit longer. In a matter of days, all of the world's burning questions about Baby Sussex will be answered.

Editor's Note: This article has been updated to include the birth announcement.