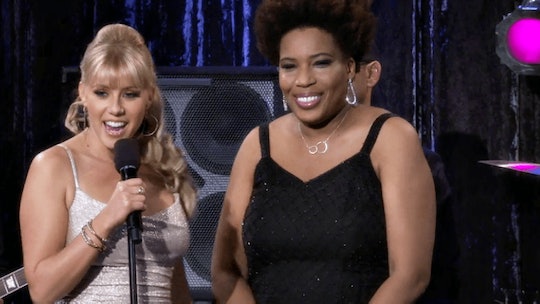 Where Can You Get Macy Gray & Stephanie Tanner's Duet?

In episode three of Fuller House, Kimmy Gibbler and Stephanie Tanner get D.J. out of the Tanner house for a much-needed girls' night out. In one of the more protracted dance scenes in the episode — and there are a lot in Fuller House — actress Jodie Sweetin takes the stage with Grammy winning artist Macy Gray to sing "The Time of My Life." And it's really, really good — despite the weirdness of the whole scene. Where can you get Macy and Stephanie's Fuller House duet? Well, we have some bad news... outside of the streaming Fuller House episode on Netflix, you can't really get it anywhere.

It's a shame, too — Jodie Sweetin can really sing. In the 20-year update to Full House, Stephanie Tanner has grown up into a jet-setting musician and DJ, spinning everywhere from Ibiza to Coachella. And although Macy Gray's cameo appearance feels totally awkward and out of place in that episode, their duet is actually really, really good. In fact, Macy Gray may have teased a new album release in that same scene — well, kinda sorta. It's complicated. Even so, the "Time of Your Life" scene is just one of many musical moments throughout the first season of Fuller House:

Here's hoping that Fuller House is the springboard for a nice musical boost to Jodie Sweetin's career. Sweetin is already a successful jewelry designer for Erica Annenberg — but with a truly lovely voice such as hers, a single hit or first album would be a great way to keep her career going after the revival of Fuller House.