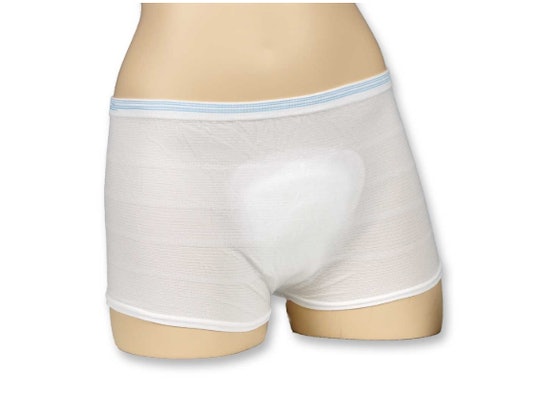 Here's Where You Can Buy Those *Amazing* Postpartum Mesh Undies

If there's one piece of advice every seasoned mom gives a mom-to-be, it's this: take all the goodies you can from the hospital when you leave. Literally everyone I know told me this when I was pregnant, and I made sure to clear out every drawer of my room for extra diapers, umbilical cord wipes, and giant sanitary pads. But those mesh panties? They were a little skimpy with those in our room, and I wanted to know where to buy the postpartum mesh underwear of my dreams. Seriously, I had a C-section and a ton of staples — the mesh underwear was half the reason I recovered so well.

Turns out, these special undies aren't just some hospital novelty and you don't have to steal them from the produce department like you're some kind of Asian pear. (Thanks, Chrissy Teigen.) Like all good things, you can actually find the mesh underwear at Amazon and there are several different brands. Apparently this type of undergarment is also popular for those suffering from incontinence, so it's not entirely unheard of to order packs. You can also find it at nearly any medical supply website, especially if you're hoping to order several pairs.

Maybe you're preparing to stock up because everyone told you to, but you're not sure why. Let me tell you something about these mesh underwear — they are everything you want in underwear — without the constriction — while you're recovering from either major abdominal surgery or pushing an actual human being out of your vagina. They're not actually supportive in the way you imagine undies to be — they don't hold your butt up in a great shape or make you feel smooth under a pencil skirt. Instead, they're basically a giant net to hold those enormous maxi-pads you'll need after delivery, but they stretch over your hips and even part of your mid-section so you feel supported enough. As Allison Chawla wrote for The Huffington Post, "I even called a different girlfriend and asked her if she had experienced these panties, and she responded 'Oh yes! The mesh underwear! They are huge and start at your belly button and go all the way up to the top of your butt crack!'"

But don't think of them as a cool pair of hipster panties. Chawla also wrote, "It provides NO support other than acting as a sling for the giant pad you have to wear after childbirth. Other than that, it’s like wrapping a loose band of gauze around your butt and stomach, which by the way, will both feel like they are sagging after your baby comes out."

I mean, she's not wrong.

But the thing about these mesh panties that I found the most amazing part? They're disposable. So, OK, imagine you're having the worst period of your life and you ruin your favorite thong. Are you going to spend an hour scrubbing that fabric with OxiClean and hoping the stain comes out? Probably not. To be honest, you were probably wearing your "period panties" on the worst period of your life, and if you tell me you don't have a pair of those, I won't believe you. Everyone has a few pairs of underwear specifically meant for those days when their uterus is shedding its lining, so imagine the mesh panties having that same function. Except, when you go to change your pad and notice there was a lot of leakage, you can just throw the entire thing away. Magic, am I right?

To really round out the entire postpartum bleeding package, may I also suggest grabbing yourself a peri bottle for some easy, painless cleansing? It's like a bidet, but just for moms. You know, because you deserve it.