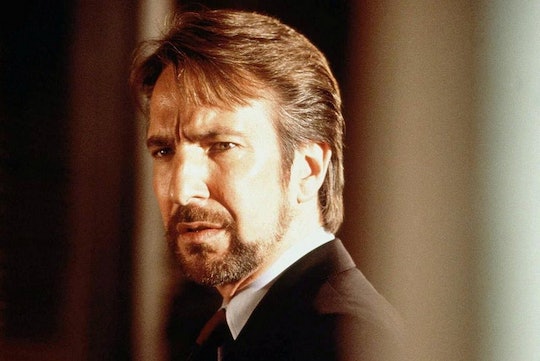 No matter which movies are your favorites, you're probably wondering where you can watch Alan Rickman's movies after hearing about his untimely death. Watching his films, from the Harry Potter series to Blow Dry, is a great way to celebrate the actor. (But make sure you have the tissues ready, because chances are you will cry.)

Known for some amazing performances, Rickman's film credits run the gamut of cinema. He's played criminal masterminds, sword-fighting villains, a double-agent wizard, a hairdresser, and even a giant, talking, floating cat. Known mostly for his roles as a baddie, Rickman has received tons of critical praise for playing such complex, difficult characters. He seems to embody these characters fully, but never so much that it interferes with other works. I mean, he is Professor Snape, right? But you can watch him in Love Actually or Sweeney Todd or The Butler and see no trace of Severus in his character. I'm not an acting coach, but I can only assume that feat is not easily achieved, especially since so many iconic roles take over an ordinary actor's future credits.

But Rickman was no ordinary actor. He was intense in the best way possible and took viewers on an incredibly journey with his acting prowess and his very real, cathartic emotions. Despite the fact that Rickman was never nominated for an Oscar, he's still one of the greatest actors of all time and should be honored with a binge session of his best and most compelling performances. If you're looking for where to watch Alan Rickman's best films, here is a list of 17 movies to stream and buy. It's time you built up that Rickman collection anyway.