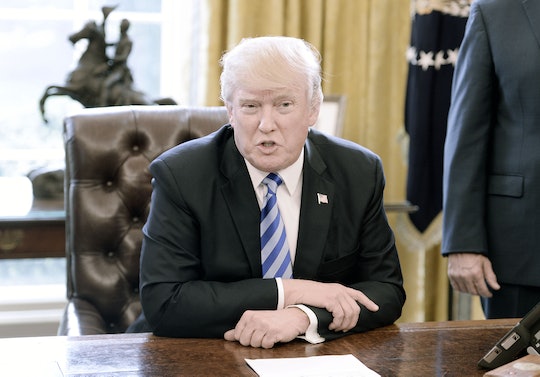 Which Senators Are Against The AHCA?

The Republicans' controversial American Health Care Act (AHCA) barely scraped by in the House vote earlier this month with no Democratic support, and it certainly has a long way to go on the road to becoming law. The Senate has not yet set a date to vote on the proposed Affordable Care Act (ACA) repeal and replacement plan, as its members plan to essentially rewrite the bill to make it more palatable to constituents now rightly concerned about losing the health insurance they've enjoyed under President Obama's signature health care law. For some, it's literally a matter of life and death — so their watchful eyes are now on which senators are against the AHCA, and efforts focused on willing them to convert their colleagues.

The problem is that it's really tough to know how certain Republican senators will vote on the legislation that eventually lands before them, because the public essentially knows nothing about what that proposal might look like. After it passed the House May 4 — on the second try after ultraconservative House members blocked the original bill — Senate Republicans expressed doubt it could pass in its current form, according to the BBC.

Many believe that the AHCA provisions such as its slashing of Medicaid, decreased protections for people with pre-existing conditions, and more would cause millions of people to be priced out of the individual insurance market, making voting "yes" on it a political minefield for politicians.

Which is exactly why Democratic members of the House sang "Hey, hey, hey, goodbye" to their Republican colleagues who voted for it. They clearly believed those AHCA supporters (listed below) would soon be out of a job.

Just days after the AHCA passed the House, Republican Sen. Susan Collins of Maine told The Washington Post that the Senate would start "from scratch" in crafting its own bill. "We're going to draft our own bill, and I'm convinced that we're going to take the time to do it right," she said. To that end, Republican leadership has assembled a 13-member all-male (of course) working group to revise the bill, which it hopes to pass through a simple majority using a budget reconciliation process. Because there are 52 Republicans in the Senate, and the bill would need 51 votes to pass, the Republicans can hardly afford to lose any of their party members and still make the bill into law.

The New York Times reported that the bill is not expected to garner any Democratic or Independent support.

Still, there are some clues as to how some Republicans plan to vote. Way back in March, before President Donald Trump pulled the original bill from the House floor when it became obvious it wouldn't pass, four Republican senators pledged not to support legislation that would roll back the ACA's Medicaid expansion. Sens. Rob Portman of Ohio, Shelly Moore Capito of West Virginia, Cory Gardner of Colorado, and Lisa Murkowski of Alaska all represent states that accepted the expansion, and they together penned a letter to Senate Majority Leader Mitch McConnell explaining their position, according to The Hill:

We believe Medicaid needs to be reformed, but reform should not come at the cost of disruption in access to health care for our country’s most vulnerable and sickest individuals.

Any changes made to how Medicaid is financed through the state and federal governments should be coupled with significant new flexibility so they can efficiently and effectively manage their Medicaid programs to best meet their own needs.

This latest version of the AHCA, the one that passed the House, of course, would cut back the Medicaid expansion. So, those four senators could together sink the bill entirely if they opted to vote no.

In the meantime, Capital Hill is undoubtedly anxiously anticipating the report from the nonpartisan Congressional Budget Office, which is due out Wednesday and will shed new light on the anticipated impact of the new bill if it were to become law.