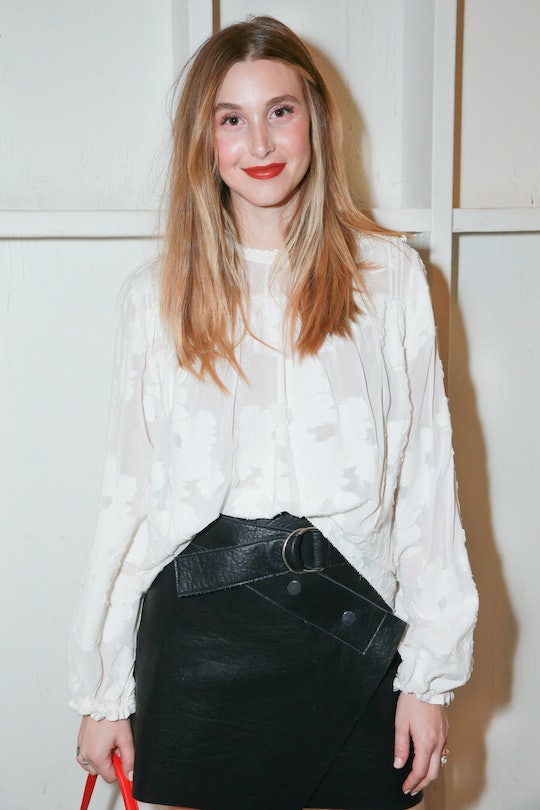 Whitney Port became a mother about eight months ago, when she and her husband Timmy Rosenman welcomed their son Sonny. As a public figure (especially one who used to star on a reality show), one might expect a mom and fashion designer like Port to document motherhood by simply filling her Instagram feed with curated posts about how effortless and glamorous it is to be a parent. However, that is not what she's about at all. She's opened up about the difficulties of parenting despite loving her son on many occasions, notably in her YouTube series, "I Love My Baby, But..." Most recently, in an interview with NBC, Whitney Port opened up about dealing with "mom guilt," the idea of a work-life balance, and the pressure that working moms face.

"I definitely deal with mom guilt all the time; even just leaving my baby at home to come on this work trip I felt a little bit guilty," the The Hills alum told NBC at a panel she led for WaterWipes about parenting in New York City. "I was nervous that I was going to get home and he wasn't going to recognize me."

So how does Port deal with the feeling of working mom guilt that so many mothers go through? She told NBC:

I just continue to tell myself that I’m doing the best that I can, that I’m working this hard for the good of my family and that the baby is going to be okay; he is going to survive and he’s with people that love him. I don't need to be the only one in my baby’s life — that makes things okay.

That being said, Port is wary of the idea of a work-life balance, and she advises parents to be OK with the fact that they may never achieve the perfect balance. "I think every day is different; some days are more devoted to baby, some days are more devoted to work," she told NBC. "I think it’s all about giving yourself the space to be okay with that and not always trying to achieve the balance because you may never find it exactly."

She added, "Give yourself a break; find your inner peace that you are doing your best and really take everything day by day."

If you've seen Port's YouTube series "I Love My Baby, But..." you know that Port is not shy about anything when it comes to parenting. She has uploaded episodes about hating her pregnancy, struggling with breastfeeding, and about the extra effort she and her husband Timmy have had to put into their marriage since welcoming baby Sonny.

And Port is not the only celebrity mama to open up about feelings of working mom guilt. Actress Ellie Kemper recently opened up about mom guilt as well, in an interview with Us Weekly. "Accepting that you’re not gonna be everywhere at once is like an ongoing challenge for me," Kemper told the outlet. "Guilt is hard to shake. I think anyone can relate to that."

So many working mothers deal with feelings of guilt when splitting their time between work and parenting, and those feelings are totally normal. Having public figures like Port and Kemper speak to this issue helps to destigmatize working mothers, and it can help make working mothers feel better knowing that so many others are feeling the same way.