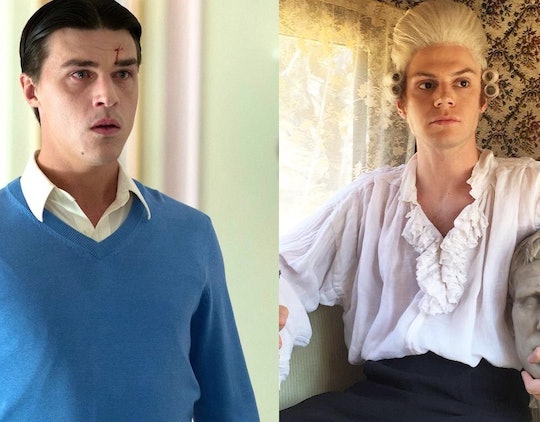 Who Is The Real Edward Mott On 'AHS: Roanoke'? Finn Wittrock Is A Likely Candidate

We can all agree that so far on American Horror Story as a whole, one of Evan Peters's best characters has been Edward Mott, even if he only got to play him for one episode. But who is the real Edward Mott on AHS: Roanoke? Now that My Roanoke Nightmare has come to an end, we've met some of the "real" people behind the actors who were involved the reenactments along with their counterparts, but we have yet to meet the real Edward Mott, who Peters' character Rory was playing. So who is Edward Mott going to be when and if we ever see the real one pop up on AHS? Because let's be honest, the odds of that happening are pretty good.

After Wednesday night, there will be just three episodes left of Season 6 and we still haven't seen Finn Wittrock, who we were were promised this season. He's remembered best as Dandy Mott on AHS: Freak Show, and the historian on My Roanoke Nightmare did tell the producers that the last living Mott, a descendant of Edward, died in Florida in the 50's, which is when and where Dandy died. So could Wittrock be coming back to AHS as a Mott once again? Honestly, it would make total sense.

In an interview with E! Online, Ryan Murphy has already made it clear that Wittrock is returning to play "the most f-ed up character of all time," which we can only assume will be the real-life version of Edward Mott himself. As Dandy, he was spoiled, crazy, and murderous, and from what we've seen so far of Edward, he shares some of those very same qualities. But we've also just been seeing the actor playing Edward, so the real one, a la, Wittrock, might be 10 times worse. He already has experience playing a crazy Mott, and why bring up the connection if nothing was going to ever become of it?

Now that all of the actors and the people who were terrorized by ghosts are back in the farmhouse on AHS: Roanoke, we're likely going to see the actual ghosts that Matt, Shelby, and Lee were talking about. But in order for that to happen, that means we need to see the versions of them who aren't played by reenactment actors, like the real Butcher, Edward Mott, and Scathach, to name a few of the key players. Fans are going to see the series scare up some legitimate horror now that the fictional part of this story is over, so get ready for things to get way more real. In fact, maybe they should just change the title to: The Real World: Roanoke.

OK, don't call it that, but they've already upped the scare factor considerably and the read Edward Mott on AHS: Roanoke is more than likely going to be an even more sadistic Wittrock.