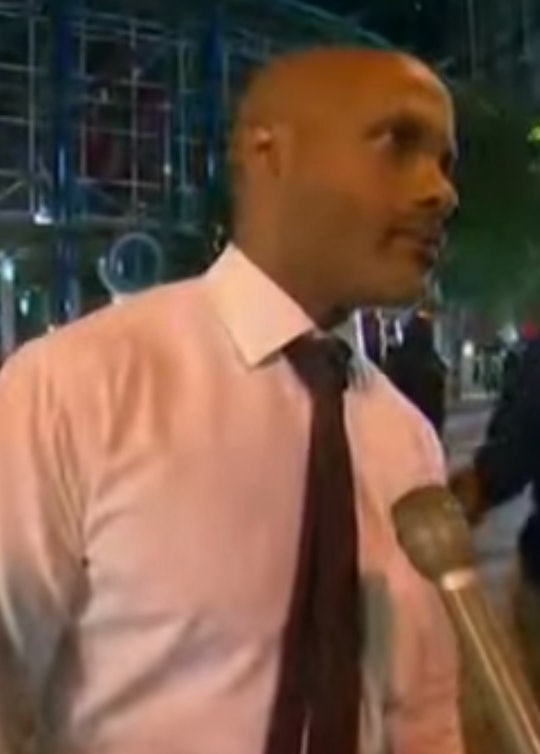 Who Is Toussaint Romain? The Public Defender Is One Of The Heroes Of The Charlotte Protest

The scene in downtown Charlotte, North Carolina this week has been bleak, and the reason for the unrest and the violence is heart-wrenching. The city erupted into protests after civilian Keith Lamont Scott died by police gunfire Tuesday afternoon. And with looting, escalating tensions between demonstrators and police (which included officials deploying tear gas and rubber bullets), and even the shooting death of a protester by another civilian, in the chaotic scrum Wednesday, the situation has only deteriorated. Enter Toussaint Romain, a peaceful protester and public defender who has been physically inserting himself between distraught demonstrators and law enforcement, a beacon of reason seeking constructive solutions.

Wearing a dress shirt and a red-and-black striped tie, Romain spent much of the evening on Wednesday walking the line between police and protestors, standing in the middle of clouds of tear gas for hours and encouraging the protesters to leave when SWAT team members bore down on them, CNN reported. He doesn't want to have to take on any more clients, he told the outlets, so he's out to minimize arrests — and violence:

People have already been hurt, of course, both physically and emotionally. News that a man was fatally shot Wednesday in what the Charlotte-Mecklenburg Police Department called a "civilian on civilian" confrontation went public Thursday, and at least four police officers have sustained non-life-threatening injuries as well. And then there's Keith Scott himself, the man who's name is now a hashtag at the center of it all.

According to reports, Officer Brentley Vinson opened fire on Scott in an apartment complex parking lot Tuesday, as police sought another person to whom they had hoped to serve a warrant. Scott's family maintains that he had been reading a book before he was killed; Police maintain that he was armed with a handgun and refused to comply with their requests to drop the weapon. In a statement provided to Romper, Charlotte-Mecklenburg Police Department Chief Kerr Putney said that Scott "posed an imminent deadly threat" just before he was killed.

The ensuing outpouring of raw emotion and frustration on the city's streets is in response to those conflicting narratives; It's an answer to police refusal to release the footage of the incident. It's another demand for recognition that black lives matter, amid the rash of shootings of police shootings of black men in this country.

It's a reality that's deeply disturbing to Romain, who also teaches criminal justice at the University of North Carolina in Charlotte, from all angles. Speaking to CBS New York Wednesday, he explained his frustrations:

If you were to take this camera and look all around, I don’t see the violence, man. Until the police are running at us, until they’re throwing tear gas at you and at me because that’s what happened earlier. Why’d you get tear gassed? Why did I? We weren’t being violent. But if we respond to them in a way that was frustrated and upset telling America, 'This is enough!,' it doesn’t mean I’m violent man, it means I’ve had enough.

In his Twitter bio, Romain bills himself as a "problem-solver," which goes a long way in explaining why he's out on the streets doing what he's doing. He's refusing to cower before injustice, but he's also refraining from using violence or destruction to achieve his goals. He's offering hope that law enforcement officials and activists will be able to engage in meaningful discussions and pursue an end to racial bias, real or perceived, in policing.