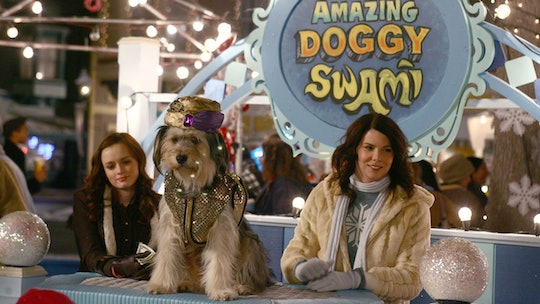 Who Plays Paul Anka On 'Gilmore Girls'? The Revival Will Bring Back Lorelai's Pet

There have been plenty of questions about the return of certain characters and actors on the Gilmore Girls revival, but one of the most important questions that not enough people seem to be asking is whether or not Paul Anka, Lorelai's beloved and loyal dog with the foot fetish, is coming back too. The answer to that is yes, but who plays Paul Anka on Gilmore Girls? The revival is bringing back her pooch, but it's been a long time since Gilmore Girls was on the air (almost 10 years, in fact) and it's no big secret that dogs don't always share as long of a lifespan as their human counterparts.

Surprisingly, though, the original Paul Anka, played by the ever adorable Sparky, will be returning to the Gilmore Girls in all of his fluffy glory. Paul Anka wasn't in the picture when the series originally began, but he came at a time when Lorelai needed him most and slid right into his spot as the quirky kind of pet that only Lorelai could raise. Around the time when Lorelai and Rory weren't exactly on speaking terms during Season 6 of Gilmore Girls, Lorelai adopted Paul Anka and it wasn't long before they warmed up to each other and became the best of friends.

Paul Anka survived Lorelai's relationship with Luke and then again with Christopher, but the expressionless dog prone to choosing pizza over salad on any given day hung in there for Lorelai and is apparently set to return for the Gilmore Girls revival. Paul Anka was adorable as a puppy and grew into a bigger version of that cute ball of fluff, and although it's unclear how much fans are going to see him in the Gilmore Girls revival, the important thing is that the original Paul Anka will be back.

With so many rumors swirling about a wedding taking place at some point in the four-part series, Paul Anka would make a pretty legitimate ring bearer, moving slowly down the aisle and maybe stopping to lick the feet of some poor guest in open-toed shoes. You know, just Paul Anka things. Or maybe he'll just be seen milling around Luke and Lorelai as they settle into domestic bliss, with or without a wedding having taken place.

According to Lauren Graham, Sparky the dog is now 14 years old and has some of the health problems that any elderly dog has, but in some ways, the Gilmore Girls revival would feel cheapened if they'd brought back Paul Anka, but had him played by an impostor dog.

Paul Anka came into Lorelai's life at a time when she needed him the most, but he stuck around after that and now that pretty much everyone else is returning for the Gilmore Girls revival, it only makes sense for Paul Anka to come back too, with the original doggy actor portraying him. Because no other pup could get those on-cue barks and quirkiness down like him.