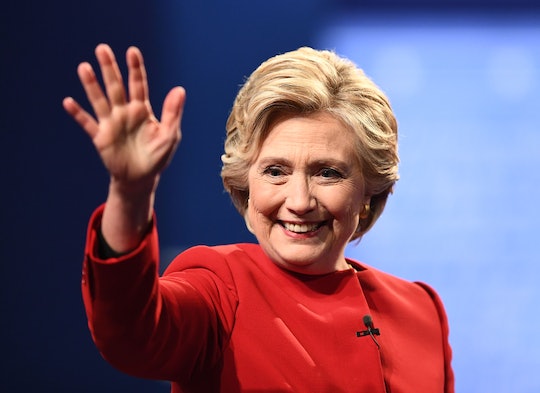 Who Won The First Presidential Debate? Hillary Clinton Was The Obvious Leader

I'm not sure that many Americans looked forward to a presidential debate more than the one that went down on Monday night at Hofstra University on Long Island, New York. Luckily for everyone, the two candidates did not disappoint. Both Republican nominee Donald Trump and Democratic nominee Hillary Clinton brought their A games, but it's not clear yet who won the first presidential debate. Though Hillary Clinton's performance was incredibly presidential in tone, statement, and status, how you feel about who won the debate sort of depends on what voters were looking for in the first place.

In the lead up to the debate, a lot of the chatter on social media and in the press centered around how the candidates were preparing for the night. The debate was set up into six segments, each lasting 15 minutes, with the candidates getting two minutes a piece to go back and forth on the issues. There were no commercial breaks for the entire 90-minute broadcast, so even on the most basic level, seeing which candidate could last that long without a bathroom break (ahem, Mrs. Clinton) or keep themselves from rambling into the ether (looking at you, Trump), counted as a minor victory.

Earlier in the month, Trump attempted to say that the debate was "rigged" since he believed the moderator, NBC News' Lester Holt, was a Democrat. Holt is a registered Republican, so any claim to bias sort of went out the window. In the same vein, though, the Clinton campaign was circulating the idea that Trump would be declared a winner even if he just managed to remain calmer than he had been in the GOP primary debates.

Neither candidate had any bathroom emergencies or extreme outbursts, and they each took the questions from Holt on the chin throughout the night. Here's how they fared, split screen and all.

Clinton began the debate with a question about American prosperity and was able to hold her own when it came to policy discussions throughout the evening.Over all, she was pretty confident and took Trump's interruption's in stride. Her high moment of the night was when she called Trump's economic plan, "Trumped-up trickle down" economics or when she said, "Well, I know, Donald, you live in your own reality." Overall, Clinton maintained a strong pace, remained calm and straight-faced even when Trump attacked or brought up her email scandals. She stuck to the issues and tried to play it professional, even when it would have been easy to be baited.

Not only did she seamlessly skirt Trump's senseless attacks, she stuck to policy, and at one point in a foreign policy discussion, looked straight into the camera and pledged to America's allies that all treaties would be respected. In that moment, the former Secretary of State won the debate in terms of what it means to be "presidential."

Trump started the evening off fairly calm, which was a new look for the candidate who spent much of the primary season knocking his opponents out one by one with insults and nicknames. But then he lost it. Trump tried to stay on message, but interrupted Clinton while she spoke from the very start and and couldn't stop sniffling for most of the first half, which was distracting. Trump's interjections and attempts to personally attack Clinton went on for most of the debate and didn't serve him well if he was going for the "calm, presidential" look. But maybe that's what Trump supporters like.

While everyone will always root for their favorite candidate, it was pretty clear that it was Hillary Clinton who came out as the clear winner. Not only did she seamlessly skirt Trump's senseless attacks, she stuck to policy, and at one point in a foreign policy discussion, looked straight into the camera and pledged to America's allies that all treaties would be respected. In that moment, the former Secretary of State won the debate in terms of what it means to be "presidential."

Clinton did more than just keep her cool. She totally nailed looking like a responsible adult worthy of leading a country while Trump seemed flustered and defensive. Every time Trump started to go off base in a way that made Holt try to bring him back in and stick to the subject, there was a glimmer in Clinton's eye.

Overall, the debate went largely as expected. Each candidate came ready with their zingers, policy points, and luckily, no one went home with any physical injury. It's never easy to declare a winner of these debates, but it's safe to say the candidates will know how to make the debates great again come October, when they face off for a second time in Missouri. Let's hope neither one of them gets lazy.