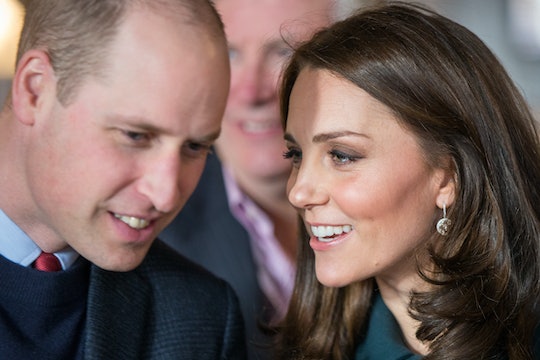 Spring is for the royals! The Duke and Duchess of Cambridge are expected to welcome their third baby into the world in just two weeks, and fans are counting down the days. But not much is known about the new royal baby, including their sex. So why are Prince William and Kate Middleton keeping their baby's sex a secret? The royal couple has been particularly tight-lipped about their third baby, so the sex is not the only thing they're keeping private.

Details about the royal baby are a mystery. The Duke and Duchess of Cambridge haven't released much information on baby no. 3 since Kensington Palace announced Middleton's pregnancy back in the fall, according to Forbes. But when it comes to the sex of the royal baby, that is something even Prince William and Kate Middleton don't even know — the royal couple has chosen not to find out if they're having a boy or a girl, CNN reported. Fans can take solace in the fact that the couple isn't withholding the information (not that they owe it to anyone).

What fans of the royal family do know is where Middleton is expected to give birth: In the Lindo Wing of St. Mary's Hospital in London, according to CNN. This is where the Duchess delivered her two other children, 4-year-old Prince George and 2-year-old Princess Charlotte.

Details released by Kensington Palace also revealed that barriers and parking restrictions have already been put into place outside of the private Lindo Wing. The restrictions and barriers are to prepare for the media frenzy that's bound to happen when the royal baby is introduced to the world for the first time, according to CNN.

Fans of the British royal family have an idea about the due date, too. The royal little one is expected to arrive around April 23, according to Cosmopolitan. But the due date hasn't been officially confirmed, so there is no way of knowing when the baby will arrive this month, either. All Kensington Palace offered back in October was this tweet:

The Duke and Duchess of Cambridge are delighted to confirm they are expecting a baby in April 2018.

But people are trying to cash in on the ambiguity. Bookies had started taking bets on the royal baby's name, sex, and date of birth, Forbes reported. And the gambling has reached a peak now that the royal baby watch countdown has begun. The odds are 10-to-1 that baby number three's birth date will fall on Queen Elizabeth II's birthday, April 21, Forbes reported.

One thing is clear: If Prince William and Kate Middleton's third child is a boy, it will not affect Princess Charlotte's path to the throne.

Traditionally, royal daughters have been bumped down the line or disregarded as heirs to the throne, with preference given to sons. But the Succession to the Crown Act 2013 had changed all that. The act is nothing short of historic because it had reformed royal protocol to require that, instead of being dependent on the sex of a royal heir, the succession to the crown will now determined by birth order, according to People. That means Princess Charlotte will make history when the Duke and Duchess welcome their third child into the world. Unlike royal daughters of the past, she won't be skipped over as an heir to the throne.

The next two months are going to pretty hectic for all members of the royal family, but especially the royal sons. And with the arrival of the new royal baby and the upcoming nuptials between Prince Harry of Wales and American actor Meghan Markle, I could imagine it will be one beautiful, exciting spring for the United Kingdom.