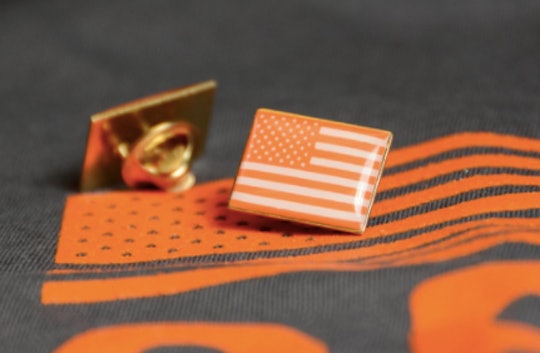 It feels red carpets have become the place for celebrities to talk about the issues that are important to them and ones that impact society as well. At the Golden Globes, for example, celebs donned little black pins to raise awareness for the Time's Up movement. And many stars are expected to add a little something to their ensembles tonight at the 90th Academy Awards and there's an important reason you'll see celebrities wearing orange flag pins at the Oscars.

The orange flag pins were created by Everytown For Gun Safety — an organization that raises awareness about gun safety and gun violence prevention — after the devastating school shooting in Parkland, Florida last month. If you want to support the organization on your own, the pins have been restocked on the Everytown website and you can buy a package of three for $15, so you can gift them to all of your friends. The organization has sold the pins for years, so you might even have one already.

Hollywood stylists told People that they plan on adding the orange pin to the Time's Up one when they dress their celebs for the big night, so you should plan on hearing a lot of the nominees and winners talk about the reforms they'd like to see.

That the country is still talking about gun violence weeks after the shooting at Marjory Stoneman Douglas High School is a testament to the courage of the teenagers who survived the shooting on Valentine's Day. Instead of letting the normal news cycle run its course — in which a shooting happens, there's a little outcry for gun safety reforms, and then everyone seems to forget about it — the Florida students are not letting anyone forget about the issues. And Hollywood is right behind them.

In addition to the numerous interviews they've done on cable news and taking politicians to task on Twitter, the Parkland survivors have also organized the March For Our Lives, which will happen on March 24 in Washington D.C., although students everywhere are planning on marching in their own cities, too. In addition to wearing pins to support the movement, some stars have also donated to the march.

George and Amal Clooney donated $500,000 to the march last month. Never one to be showed up, Oprah matched the donation, too. She tweeted:

George and Amal, I couldn’t agree with you more. I am joining forces with you and will match your $500,000 donation to ‘March For Our Lives.’ These inspiring young people remind me of the Freedom Riders of the 60s who also said we’ve had ENOUGH and our voices will be heard.

There are some people out there who insist that teenagers and celebrities shouldn't talk about politics, but that's not stopping them from marching or wearing pins on the red carpet. On the March For Our Lives website, the organizers explain that keeping kids safe from gun violence isn't really a political issue. It says, "School safety is not a political issue. There cannot be two sides to doing everything in our power to ensure the lives and futures of children who are at risk of dying when they should be learning, playing, and growing." The organizers add:

The 2018 Oscars red carpet won't be the first time celebrities have fought for gun safety or partnered with Everytown For Gun Violence to raise awareness for the issues. After the Las Vegas shooting in October 2017, Emma Stone, Julianne Moore, Melissa McCarthy, and others participated in a PSA demanding stricter gun laws and more regulations about who can purchase a gun and where. Pins and marches won't change our gun safety laws on their own, but raising awareness on the red carpet with an orange pin is not a bad place to start.

More Like This
Lifelong Teacher Dr. Jill Biden Loves Watching Abbott Elementary Too
Chrissy Teigen Says She’s Come To Understand She Had An Abortion To Save Her Life
Khloé Kardashian Reveals Tristan Thompson Proposed To Her Last Year & Why She Said No
Kim Kardashian Stars In Hilarious House Of The Dragon Parody, The Targashians