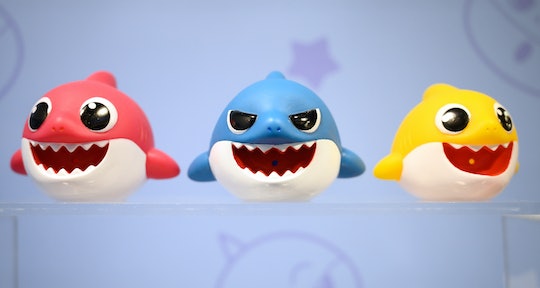 This song is a huge deal, and it’s been played literally billions of times on YouTube. (Why the heck didn’t we think of this song first?) Every kid in the world is pretty much obsessed with it, and Linda Nelson, senior content director and creator of KinderCare’s Music Explorers Learning Adventures program, has an idea why. She tells Romper that "Baby Shark" is everything a kid wants in a kids’ song. “The repetition, the beat, the hand motions, the engaging graphics that include real kids over an exciting, animated background, the fact that real — and diverse — children are shown, and that kids are the main voices,” is just part of it. “Also, the theme of focusing on family members is a topic most children can easily relate to. The family is the circle of influence for kids, and something that they are already knowledgeable about. It’s an environment that they spend their time in — the center of their world. So having a child and their family going on an adventure is something kids can relate to. And it’s got a great story arc — the song details a full story from beginning to end, even in its simplicity."

Rebecca Parlakian, senior director of programs of early childhood development nonprofit Zero to Three, agrees. “A study involving slightly older children (kindergartners) found that children preferred songs that were quick to learn, had strong or soothing rhythms, and incorporated movements. All of these variables are there in 'Baby Shark' and I think they probably make this song pretty attractive to toddlers and preschoolers," she tells Romper. "When you think about a toddler, they have limited language skills, are engaging in parallel play (play next to, but not with a peer), yet they have a huge desire to be independent. 'Baby Shark's repetition and strong pattern helps them learn and remember the (fairly simple) lyrics."

And like Nelson suggests, those hand motions are top notch dance moves that set the song apart. Parlakian says that they are "entirely doable for a 2 to 3-year-old, and allow them to participate ‘all by themselves’ while connecting (in parallel) with peers." It's practically magic.

But if you're officially over the music of "Baby Shark," teach your kids some new dance moves to your favorite tunes — your kid doesn't have to listen to "baby" songs to reap the benefits of music. "Research shows that children who are exposed to a vast array of musical sounds throughout their childhood years form positive musical appreciation values," Parlakian says. "Music can also strengthen relationships within families, especially if parents or caretakers are enjoying the music with children." She says there are several studies out there on how music influences a child's development, including helping their brains process speech — baby and shark just might be their first words.

Just remember that even if your kid's obsessed with "Baby Shark," that doesn't mean they should only listen to playlists full of kid-specific songs. "A lot of the music recorded for children is considered fairly low quality in terms of production and musicality," Parlakian says. "Music marketed as ‘kids’ music’ tends to be more about the lyrics than the tune or instrument/music quality, and typically features singing in major keys only. Instead, we encourage parents to expose children to a lot of different kinds of music — a balanced musical diet of classical, rock, classic rock, rap, hip-hop, jazz, and more."

If you've been avoiding "Baby Shark" for your kid, don’t worry, they aren’t missing out on any great developmental milestone. But for those whose kids are obsessed, always acting it out, and demanding it be played on repeat, just think of the science — it’s catchy, repetitive, has hand motions, and allows them to be somewhat independent and engage in parallel play. If you're really tired of it, maybe teach them The Electric Slide.