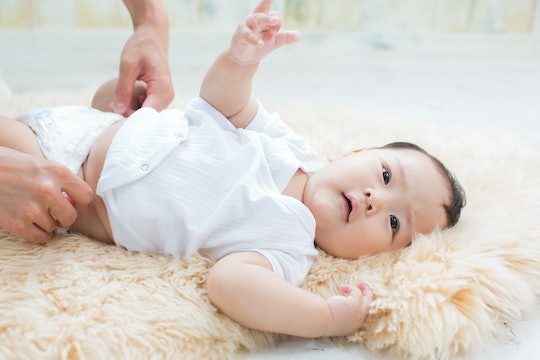 Like that canonical piece of children's literature has told kids for generations, everyone poops. And everyone's poop has an unpleasant smell, at least to some degree. However, if you’ve recently switched your baby from breast milk to formula, or are doing some combo of the two, you (or your nose) may have wondered why why formula poop smells worse than breastfeeding poop. You're not mistaken; it does smell different, but this is totally normal and your baby is just fine.

“Babies were made to digest human breast milk. This is the main reason there are differences in poop from breastfeeding and poop from formulas,” Dr. Jarret Patton (who goes by Doctor Jarret), pediatrician and author of Whose Bad @$$ Kids Are Those? tells Romper. “The consistency of breast milk derived poop tends to be less formed and 'seedy' with a less offensive odor. This is because breastmilk is the most easily digested food for a baby.”

The mustardy “seediness” you are seeing in the breast milk stool is undigested milk fat, which is normal, according to neonatologist Dr. Timothy Yao. “Formula-fed babies’ stools are usually a little firmer and pasty in consistency,” he says.

In the first few days after birth, regardless of whether or not a baby is formula or breast fed, their stools will have very little odor. During this phase, they will be passing meconium, which is tar-like in appearance and contains a mix of things that were ingested in utero like amniotic fluid, mucus, bile, and — brace yourselves — hair, known as lanugo, which covers a fetus' body, per Parents.

Even though it looks pretty alarming, meconium is sterile, per the American Academy of Pediatrics, and has no smell. But lest you think you won the baby poop jackpot, all babies’ poo will smell once bacteria colonize their intestines, an essential part of digestion.

“The smell of poop is caused by the bacteria in it — and everyone, no matter how healthy, has bacteria in their poop! Because breastmilk is full of healthy probiotics designed for an infant's growing and developing gut, often breastfed poop has a less noticeable smell than formula poop,” Kristin Gourley, IBCLC with Lactation Link LLC, tells Romper.

The smell (and even the color) of breastmilk poop may change depending on what the breastfeeding parent has eaten that day, but generally breastfed poop has a light, sweet smell, per Healthline. (Some parents liken this scent to popcorn, which just ruined the movies forever.)

If you’re using the same formula, however, the smell should remain consistent, even if it’s consistently pungent. “Formulas based on cow's milk, soy, or some other protein aren't as easily digestible and may have a more formed stool with a more potent odor. However, these differences are nothing worth worrying about," Patton says.

Sure, strong smelling poop may make diaper changes a little more unpleasant (not that they’re particularly pleasant to begin with) but a funky diaper is nothing to be too concerned about. However, all stools will smell stronger the longer they’ve been exposed to bacteria in the intestine, so if your baby seems constipated or like their bowel movements are painful, this may cause a foul odor, and is something you should definitely address with your doctor.

“In some cases, extremely foul-smelling stool may be an indication of inadequate digestion or malabsorption of nutrients,” Yao says. “But if the infant is growing fine and the stool color and consistency are normal, smelly… is just the way it is.”

Dr. Jarret Patton, pediatrician and author of Whose Bad @$$ Kids Are Those?