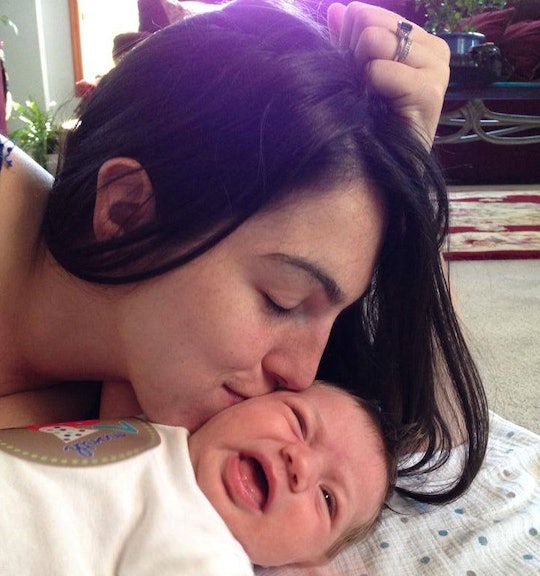 There has been a backlash of late, both on this site and elsewhere, regarding the term "natural birth" and why it's problematic. Its critics are not without their fair points. To quote Romper editor Danielle Campoamor (actually, my editor Danielle Campoamor), "there's a big problem with labeling any one way to give birth 'natural.' I realized that it's the same problem women face on a daily basis; a problem that divides instead of connects." But ultimately, with respect to my colleagues and fellow writers, I completely disagree. (Danielle, don't fire me.) I don't mind the term natural birth, not even a little bit. Not even as a mom who's had a c-section. There are actually a bunch of reasons I don't mind it, but they all ultimately boil down to one overarching reason.

So let's start with the idea of what "natural birth" even means. According to some people, I've had a "natural birth" when my daughter was delivered vaginally after I'd had a c-section, a c-section that helped me deliver my son two years prior. To them, "natural" means "vaginal." To others, the fact that I employed the assistance of an epidural (a magical, wonderful epidural) means that I did not have a "natural birth." OK, so what if I'd skipped the epidural and given birth vaginally, but it was a vacuum assisted birth? Or what if I'd had an episiotomy? Or had used Pitocin? ‌

Some people consider a natural birth to simply mean a birth in which the mother did not utilize anesthesia of any kind. Others consider any medical intervention to be incompatible with a natural birth. So, are we already seeing a problem here?

"Natural birth" is a pretty useless term because it doesn't have a standard definition (sort of like "all-natural" labeling on foods). It's completely subjective. This is where Campoamor's point about being divisive is relevant and well-founded. She goes on to add that the term "leaves so many women feeling 'flawed' or 'less than' or like they're failures and, as such, 'failed women.'" The answer, she concludes, is to stop using the term. Honestly, that's a fine answer. Personally, I don't use the term because a) I know it can be hurtful to others, even if it isn't to me and b) as stated above, it's completely meaningless anyway.

That said, because it's meaningless anyway, it's worth while to stop and ask one very important question: who cares? Rather than avoid it, why not just accept that if someone is using the term to define their own experience (or, unfortunately, to make you feel crappy about yours) that's telling you more about their thoughts on birth than about birth itself? Why not let this be a "you do you" moment? If someone is talking about their own experience, let's just accept that's how they feel about what they went through. If someone is being nasty to you, why not stare the would-be divisiveness in the eye, smirk and simply say not today, Satan.

Another reason I'm unbothered by the term natural birth (this may sound harsh at first but bear with me, because it's not): Some births aren't "natural."

By that I mean medications and/or procedures used in some births do not exist in nature and that's all I mean because that's all that "natural" actually means: existing in nature. You know what else isn't natural? Peanut butter. Chocolate isn't either, and neither is television. All of these things, however, are awesome.

"Unnatural" doesn't mean "bad" or "abhorrent." It means "contrary to the laws or course of nature." Look, I don't know if you've watched Animal Planet lately, but the course of nature isn't always so awesome (just ask the ghost of an adorable baby seal eaten by a shark). A lot of the time nature sucks. Case in point: friggin' mosquitos. Definitely not as awesome as eating a peanut butter cup while watching Game of Thrones. Herman Melville understood this undeniable fact in 1857 when he wrote The Confidence Man. In Chapter 21, a con-artist attempts to sell an herbal cure to a man with a cough, at which a skeptical man pipes up:

"Because a thing is nat'ral, as you call it, you think it must be good. But who gave you that cough? Was it, or was it not, nature?"

Basically, why I don't mind the term "natural birth" can be summed up in a two words: so what? The term itself is imprecise and devoid of any actual meaning. Yet while it can leave many women feeling defeated (or, conversely, smug and massively irritating) it can leave many other women feeling downright empowered. This tiny little word means something to them, so why take that away? Let them have it. Let "natural" mean whatever it means to them and play a linguistic role in how they share their birth experience and story with the world.

At the same time, the existence of this term or this concept, even a more fleshed out, specific version of this concept (like, if we collectively got it together and stated once and for all what constitutes a "natural" birth), doesn't have to delineate between a "good birth" and a "lesser birth." Birth is bringing a baby into the world: everything else is, essentially, a cosmetic detail. This word currently can serve to divide us as parents, but it doesn't have to. Rather than erase the differences between birth experiences, let's get to a point where we can feel confident that the choices we make are the right ones for us, without "natural" serving as a qualifier. I'm not offended by "natural" because to me, it's neutral, and I think it's about time we neutralize natural.