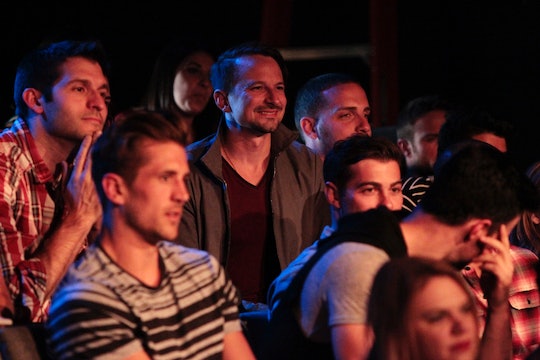 Why Is Evan Bleeding On ‘The Bachelorette’? Many Think Chad's To Blame

Whether you've watched every episode or have only seen the previews, you know that this season of The Bachelorette is filled with fights. And not just the verbal ones fans are used to. In a preview for the June 7 episode, viewers see several contestants bleeding during a pool party. One of whom is erectile disfunction specialist Evan. So why is Evan bleeding on The Bachelorette? Though the show won't air for 24 more hours (damn you ABC) a few theories have formed on his injury.

The first, and most popular assumption, is that Evan was attacked by his nemesis (and this season's villain) Chad. And, although it's unlikely, it's not totally out of left field. During tonight's episode, the two came to physical blows after Evan attacked Chad during a group date. As part of the date, contestants were told to reveal an embarrassing sex story. Evan, being a self-proclaimed expert on penis performance, used this as an opportunity to insinuate Chad takes steroids and, as a result, can't perform in bed. Chad took offense to this (and rightfully so. Seriously Evan, that wasn't cool), and decided the best form of revenge was physical. Following the performance, Chad is seen pushing Evan and ripping his shirt. That altercation, combined with some verbal attacks later in the evening, led the guys to call a security guard to watch over Chad.

So is Evan's bloody head a result of Chad's anger? It's definitely possible. But, at the same, time, reality show producers like to hype things up. Need I remind you of Leah's black eye from the last season of The Bachelor? Even fans are skeptical of the preview.

But there is another bloody contestant that people seem to be more concerned about — James Taylor (no, not that one; the other one.) In the preview for the June 7 episode, fans also see blood streaming from the singer/songwriter's head while Jo Jo cries in the background. Although it'd make sense for Chad to lash out at Evan, I don't see how James fits into the violence equation. I mean, he is the most innocent person on the show. Who would hit James Taylor? (OK, maybe other James Taylor for stealing his name.) Seeing James bleed has gotten fans riled up.

If you want my opinion, I think these two got caught up in a rowdy game of chicken and just hit their heads. But that story doesn't make for super exciting TV. The only way to find out is to watch tomorrow night's episode.