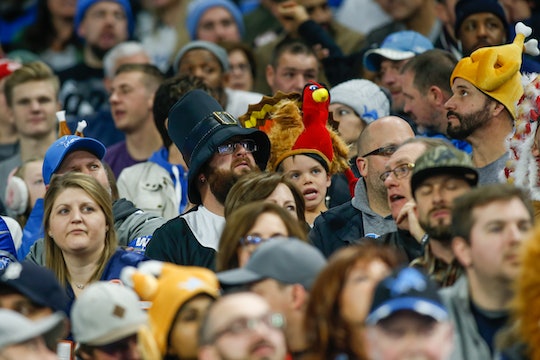 So This Is Why You Spend Every Thanksgiving Watching Football

If your family schedules the Thanksgiving Day meal around what time the Lions or the Cowboys play, then you know that football is as traditional as turkey and cranberry sauce. Still, you might wonder why football is a Thanksgiving tradition. The answer requires a trip down history lane — all the way back to the 19th century.

In 1863, President Abraham Lincoln announced Thanksgiving as a national holiday, and the first Thanksgiving Day football games started shortly thereafter in 1876, according to History.com. That trendsetting game was a face-off between Princeton and Yale, and set the precedent that Thanksgiving Day would become the traditional date for the Intercollegiate Football Association’s championship game. Even high schools got involved, with teams from Boston Latin and the English High School of Boston playing their rival game on Turkey Day each year since 1887.

Pro football leagues adopted the idea of adding some pigskin to Turkey Day too, and History.com adds that when the National Football League kicked off in 1920, it hosted six Thanksgiving games each year. As of 2019, the NFL schedules three games on Thanksgiving Day each year. Fans who grew up with these games as a tradition will already know that two teams are always involved: the Dallas Cowboys and the Detroit Lions. So, why is that?

While most colleges and high schools don’t participate in Thanksgiving games anymore, the tradition has gone nationwide thanks to the NFL. The Lions got on board in 1934 with the idea of the Thanksgiving game when the team’s owner, George Richards, scheduled the game as a way to get attention for the team, which was brand new.

Richards was a radio executive who purchased the Portsmouth Spartans, moving them to Detroit, and using his radio connections to get his Thanksgiving Day matchup broadcast on 94 stations, noted the Pro Football Hall of Fame website. While Richards knew it was risky to schedule a game on Thanksgiving Day, he made the gutsy move to try and outshine Detroit’s baseball team, the Tigers, who had been overshadowing his Lions so far.

Unfortunately, the brand-new Lions had to square up with the reigning champs of the time, the Chicago Bears. And in a historic but not surprising bummer: the Lions lost that first matchup to the Chicago Bears, but only by a field goal; the score was 19-16. But the game that sold more than 26,000 tickets two weeks ahead of the game, according to the PFHOF, started a tradition that still carries on to this day. And hey, they came back next year and won the NFL Championship in 1935!

In 1966, the Cowboys’ general manager added his team to the Thanksgiving lineup, noted History.com. The Pro Football Hall of Fame noted that they’ve only missed two years since: 1975 and 1977. With so much history behind the Thanksgiving Day football game, it’s easy to see why so many families plan their meals around watching their T-Day team of choice take the field.