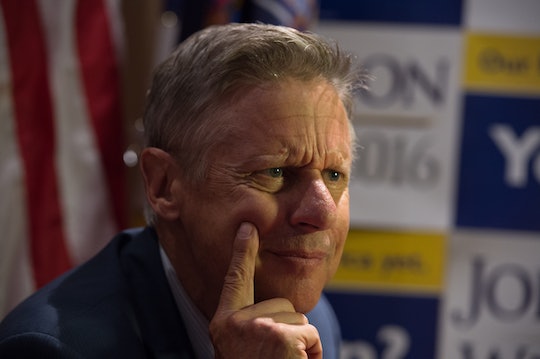 Why Isn't Gary Johnson At The First Presidential Debate? He's Hoping To Get In For No. 2

After he dipped in the polls following July's Republican and Democratic national conventions, Donald Trump recklessly expressed a concern that the general presidential election would be rigged in favor of his opponent. Now, the polling chasm between Trump and Hillary Clinton has narrowed significantly as they meet on the debate stage Sept. 26 — and one of their much less well-known challengers is this time calling foul. Libertarian candidate Gary Johnson isn't in the first presidential debate because of low polling numbers. He's on the ballot in all 50 states, though, and he's not giving up the fight to have the chance to talk policy with the race's leaders during the second and third debates.

The Commission on Presidential Debates mandates that candidates must reach a 15 percent polling threshold in order to make it into a debate, and, traditionally, only the two major-party hopefuls achieve this. A Reuters/Ispos poll released September 21 showed Johnson garnering just 7 percent of likely votes, compared with Trump's and Clinton's 39 and 37 percent, respectively. The former Republican governor of New Mexico has argued that his lack of support stems from an inadequate amount of media coverage, according to the International Business Times, and even lamented on CNN's Reliable Sources that "70 percent of America right now doesn't even know I'm in the race."

But Johnson — who bills himself as a fiscally conservative social liberal advocating for smaller government and minimal foreign policy intervention — is dedicated to changing that. In the weeks before the first general election debate, he amplified the #LetGaryDebate hashtag on social media. And even though his running mate, Bill Weld, also didn't make the cut to debate the other potential veeps Oct. 4, he's working hard to make his voice heard on Oct. 9 and 19.

"The CPD may have excluded us from the first debate, but we can still get on the stage in October," Johnson wrote in an email to supporters and reporters September 20, the day the commission confirmed its decision, according to the International Business Times. "Hillary will call Donald an egomaniac. Donald will call Hillary a crook ... We are the only campaign that is offering an honest and positive alternative to the Donald's and Hillary's hate fest."

Unfortunately for Johnson, being the "alternative" also comes with at least one debilitating hurdle to overcome: the lack of exposure. Despite the fact that Trump and Clinton are possibly the two least popular presidential candidates in the history of the United States, they benefit from an establishment backing that Johnson lacks. For this reason, Johnson implored the Commission on Presidential Debates to permit him to participate in just the first debate despite his polling numbers. If his support didn't rise to at least 15 percent after that, he promised, he'd quietly sit the subsequent ones out.

While Republican Donald Trump has seemed to flourish amid a barrage of negative press (like when his son compared Syrian refugees to Skittles to make a point about immigration and terrorism), the same has not been true for Johnson. On Sept. 8, the Libertarian had his ride on the new cycle when he astoundingly responded to a question about the Syrian city ravaged by civil war and ISIS by asking "What is Aleppo?" on MSNBC's Morning Joe. This widely mocked comment should have at least gained him some visibility (and maybe even some more support, using Trump's "All press is good press" model), but he's still struggling to wedge his name and his message into the wider American consciousness.

To be sure, elections aren't generally won one gaffe at a time, but Johnson's current approach, for whatever reason, isn't enticing the masses of voters his campaign is courting. Still, he truly believes that his vision for the country is superior to that of both Clinton and Trump, and is willing to do what it takes to make sure Americans who where he stands and what his plans are. The debates would be a great place to do that, if only there were a podium on those stages for Gary Johnson. With more hard work and tough campaigning, though, perhaps there will be in October.