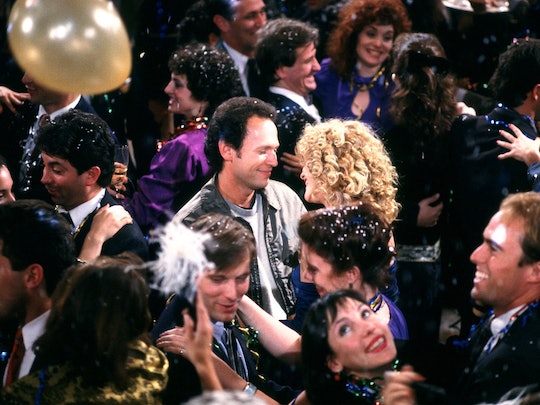 There's A Very Good Reason Moms Watch So Many Rom-Coms

"Why are you crying?" a friend asked abruptly as I answered her FaceTime call. I touched my cheek in confusion, not having realized that tears had appeared. "Oh, um, I'm just watching When Harry Met Sally," I told her, feeling sort of guilty and embarrassed. "It's almost over. They're finally together." In truth, this was not the first time I'd been caught red-handed in the last year and a half wearing a tear-soaked nightie or surrounded by crumpled Kleenex as my partner or a buddy mumbled some version of "not again" in between contained guffaws. Watching romantic comedies has been a staple of my life since becoming a mother, even if a more pretentious pre-baby version of myself would've deemed the genre vapid or foolish.

That version of myself would've likely turned her nose up at Crazy, Stupid, Love, at Never Been Kissed, at anything starring Hugh Grant, or at rom-com soaps like Jane The Virgin. Any plot seemingly limited to two people wanting to be together, but failing to be together, only to ultimately end up together(!) would've made me cringe. So simple and uninspired. So unrealistic and anti-intellectual. Love wasn't a neatly packageable, 90-minute series of wacky twists and turns, and anything suggesting otherwise must be reductive, I thought.

Like most breeds of pretentiousness, though, my preliminary assumptions about the genre were misguided. I had my daughter almost 18 months ago, and am currently expecting a second. Most of the time, I feel overwhelmed and anxious about something — my abilities as a parent, the elusive motherhood/career balance, or the plain old lack of me-time. I miss the days when I had to look out only for myself. I miss feeling young, carefree, or spontaneous. Rom-coms, however, are an escape from all that.

They serve as a dose of lighthearted, take-your-brain-out and smile, cry, or laugh entertainment. They aren't something to be ashamed of. In fact, they've really had my back through these transformative times.

It's true that some rom-coms have more to them than others. 10 Things I Hate About You, for example, features a feminist lead in a pre-Tumblr era, while 27 Dresses is arguably more of a traditional "girl loves boy, boy doesn't love girl, but girl ends up with new and better boy" script.

The same can be said of any genre, though. Whether we're talking sci-fi, dark comedy, historical drama, or indie, some films will always have more depth to them than others. Who's to say, however, that depth — as defined by your professor's list of academic criteria or that Urban Outfitters-exclusive hipster handbook for living — is, or must be, an essential component to the experience of joy? Who's to say something has to make you think about complicated philosophical sh*t before it can be deemed "good?" Who's to say we — especially mothers who are so often struggling to keep our actual sh*t together — don't all deserve a little bit of easy fun?

Since delving into rom-coms more, I'd actually argue that sometimes the simplicity of these narratives is precisely what makes them so immersive. Escapism can come in all forms, but any type that temporarily inundates one with warm, fuzzy feelings is a valid one.

Rom-coms have a tendency to end happily: To present us with idealized, cheesy, and over-the-top narratives of love that we'd be pressed to see wholly replicated IRL.

In turn, they allow us to forget about our problems and instead focus on the problems of a couple of make-believe heroes. When the heroes' problems are inevitably solved by the conclusion of the movie, we can perhaps walk away feeling a little more cautiously optimistic about solving our own. Rom-coms offer us as viewers an opportunity to distance ourselves from the grim realities of actual life for two hours at a time. And perhaps that's the point.

Vivian Ward and Edward Lewis probably wouldn't end up together in the real world, for instance. He'd likely be too focused on his image. On his work. On his colleagues. On his reputation. She might be even more closed off to the idea of true love than she was in the story; life — and everything she had to do to survive in it — undoubtedly hardened her, leaving her unable to feel much of anything. In Pretty Woman, however, these two people from vastly different walks of life can connect; through each other, they can learn, and grow, and feel infinitely less alone.

Then there's something like Home Again. IRL, being a single mother of three might be met with pity by third parties, or internalized shame rooted in notions of failure. Reese Witherspoon's Alice, however, is very clearly a strong, sexy, and sophisticated lady. She can hook up with a hot dude two decades younger than she is, and not be reduced to a culturally frowned-upon "cougar."

Since becoming a mother, my life has changed in more ways than I could ever list. Although I've always been an anxious person, motherhood has largely felt like an endless string of conspiracy theories I've formed against myself. I constantly ask, am I present enough for my daughter? Am I doing enough to advance, or at least maintain, my career? Did those tweets about how hard being a parent is suggest that I don't also thoroughly enjoy it — or that I'm ungrateful? So many parents are doing this alone, after all. On that note, am I having enough sex with my husband? Is he secretly wishing we were still kid-free? Should I have left my full-time job? Am I going out enough? Am I going out too much? Do my non-parent friends still give a sh*t about me? Am I doing enough to show that I still give a sh*t about them?

When I'm not too tired to even think, I second-guess everything. I waste days asking myself questions I cannot possibly answer. But I know there's something I can do to, at least briefly, turn down the noise. I can watch a 13-year-old invade Jennifer Garner's 30-year-old body. I can laugh, and cringe, as Ryan Gosling tries to date a life-size sex doll. I can cry when everything miraculously comes together at the end of Love Actually. I can swoon over how painfully relatable Joseph Gordon-Levitt's character is in 500 Days of Summer.

I can distract myself in a series of jokes and kisses, finding joy through it all when everything else around me feels hard, or even hopeless. And come the end of those 90 minutes, I may even find that all traces of defeatism have left the room. Even if only for a short while.