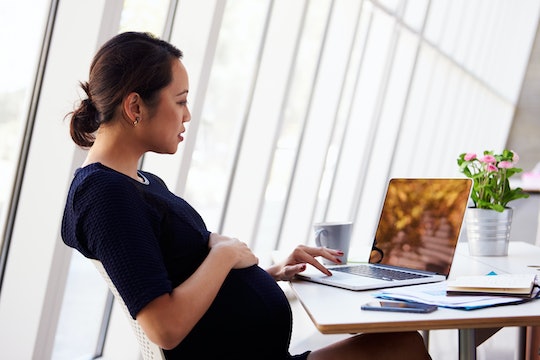 Expectant moms are faced with approximately eight million little decisions every single day of their pregnancy. To co-sleep or sleep train? To get the epidural or not? To wear a t-shirt that says “Don’t eat watermelon seeds," or to punch the person who gifted said shirt? But one of the trickiest questions for many is when exactly to take maternity leave. Many women opt to work right up until that first labor pain in order to have more time with their child after the birth. However, there are instances in which a doctor might encourage taking an early maternity leave.

For most women who are having a typical, healthy pregnancy, working until their water breaks mid-Powerpoint presentation is perfectly alright. Take Raechel McGhee, for instance. She's a psychotherapist who, according to Cosmopolitan, actually did an on-camera interview with PBS while in labor.

However, we aren't all Raechel McGhee (who is clearly part superhero), and for some of us, it can be in the baby's best interest for mom to clock out early. Below, Romper takes a look at some of the reasons an OB-GYN might encourage someone to tap out before becoming fully dilated.

Like when your work is physically demanding. There are certain jobs that are unfortunately not so compatible with growing a human in one's gullet. Things like firefighter and construction worker are the obvious go-tos, but there are other jobs (flight attendant, healthcare worker, manufacturing employee) that can also make that third trimester rather tricky.

The CDC states that any job that requires standing for long periods, lifting heavy objects, or repeatedly bending at the waist really isn’t great for pregnancy. With some of these occupations, this can be managed by simply being sure to take breaks, or to not lift things over a certain weight. But if not, an OB-GYN might suggest calling it a day sooner rather than later in order to cut down on bodily strain.

There's also a chance you don't feel as great as other pregnant people. Yes, hyperemis gravidarum sounds like a spell Hermione might have used to give her hair more body (not that she ever needed it), but it’s actually a condition wherein one’s pregnancy is a non-stop pukefest. This isn’t your average morning sickness. Per the Cleveland Clinic, this is "extreme, persistent" nausea and vomiting that is believed to be triggered by rising hormone levels. More severe cases actually send women to the hospital for IVs of fluid. So yeah, not ideal for work, as many find it hard to focus when barfing.

It's what plagued Amy Schumer and Kate Middleton alike. And yes, Schumer did manage to do an amazing stand-up special literally while fighting back gagging. Which was truly awesome, yes, but I mean if she had actually puked on stage, she totally could have made it work, no? Most of us don’t have that kind of gig. Puking onto the conference room table, for instance, might not play as well.

An obvious one is if your pregnancy is considered high risk. If a woman is carrying multiples, or has a condition like preeclampsia, placenta previa, or diabetes, the US Department of Health and Human Services classifies the pregnancy as high risk. And when it's high risk, there's a very high chance the doc will suggest not only taking leave, but in some cases, full on bed-rest.

There are also some work environments that can expose a developing fetus to potentially harmful substances. As noted on What to Expect, jobs like working on a farm, in a toll booth, or in a rubber factory can pose risks. Or maybe you're a doctor or nurse who regularly deals with X-rays or handles powerful cancer medicine. Work with animals? There’s a risk of contracting toxoplasmosis.

By law, an employer should make sure an environment is safe for a pregnant woman, and if that means working there in a different capacity for awhile, then that might be the easiest solution. But if there are no work-arounds, a doctor will likely say it's simply not worth it.

And finally? It's absolutely worth taking maternity leave early because You. Are. Wiped. One doesn't have to have high blood pressure, or be puking on the hour, or work in a paint factory for their doctor to maybe nudge them toward an early leave. Maybe you are exceptionally stressed by your job, or already have other kids you're chasing around, or are simply freaking exhausted. (Not sure if you're heard, but growing another human in one's body can be rather fatiguing.) Your OB-GYN might take one look at you and the raccoon circles under your eyes, and tell you to haul yourself home and get some rest.

As with all of these major motherhood decisions, when it comes to maternity leave, it's a completely personal thing, can be different for everyone, and all comes down to what is best for you and your pregnancy.

And anyone who dares to raise an eyebrow at you for not working until the last possible second — don't sweat it. All new moms soon discover that everyone has an opinion on the best and right way to do things. There will always be someone out there waiting to tell you that nursing your child more than six months is weird. Or that nursing your child for one day under three years is on par with neglect. Or that baby swings are the devil. Or that the name Galen is awful. But when it comes to making choices for you and your baby, it's important to simply shut out the noise, have a good doc that you trust, and in the end, go with your gut. Your ever-expanding gut.