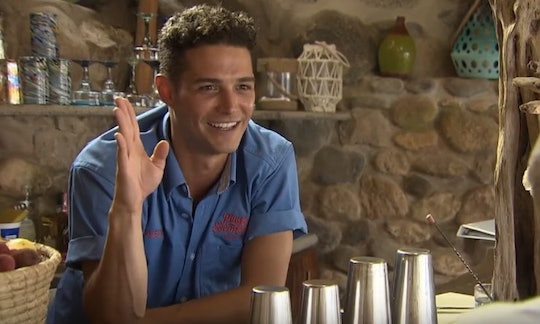 Why Wells Absolutely Cannot Be The Next 'Bachelor'

Even before Wells popped up as Jorge’s replacement as the bartender on Bachelor in Paradise Season 4, fans adored him. But as much as many of us would want him to continue in the franchise by being the next Bachelor, there are a few reasons why Wells can’t be the next Bachelor, regardless of how much fans want it to happen. And boy, do they.

To help refresh your memory, Wells made his first appearance in the franchise during JoJo’s season of The Bachelorette and was met with plenty of positive responses when he came back to Bachelor Nation for Season 3 of Bachelor in Paradise. So obviously he’s never really left fans’ hearts. Even though, as the bartender in paradise, Wells can’t really give out any roses, he and longtime friend and fellow Bachelor Nation star Danielle M. shared a kiss before she left, leaving fans wanting (and even needing) more.

But Wells’ appearance on Season 4 of Bachelor in Paradise also helped fans realize how much they want him as the next Bachelor. Unfortunately, it doesn’t look like that will be happening anytime soon. First, there’s the whole Danielle M. thing that fans are still shipping, but there’s also the fact that Wells himself isn’t too keen on the idea.

This season on Bachelor in Paradise, viewers got to see something big grow between Derek and Taylor and even a possible love between Kristina and Dean, however messy that’s been. But another highlight of the season was when Danielle M. and Wells sort of admitted their feelings for each other and even kissed goodbye.

Outside of Bachelor in Paradise, they were already good friends and often hang out in the same group of people at home in Nashville. Even though Danielle M. left to take on a charitable opportunity in Africa, she’s back home now and recently, she and Wells were pictured with Evan, Carly, Derek, and Taylor. Since the other four are already two couples, it wouldn’t be totally out of left field to assume that Wells and Danielle M. could very well be a couple now as well.

Recently, Wells addressed the rumor of being the next Bachelor with Ben Higgins and Ashley Iaconetti on their podcast Almost Famous, and talked about whether or not he’d even be into the idea. "Hmmm … I don’t know. That’s a conversation that I’d have to have with like my family," Wells told Ben and Ashley. "I think, I don’t know, that’s not something that I take lightly. I don’t know if I would do that, to be honest with you. I think it’s like, it might be nice to be asked to the prom, but I don’t know if I’d really want to go."

Wells had similar sentiments when Entertainment Tonight caught up with the radio personality/paradise bartender to ask him about potentially being the next Bachelor. "No one's talked to me about it," Wells revealed. "It's something I wouldn't take lightly and I'd have to speak to my family about. I have a big family, four siblings, nieces and nephews. Your family has to be a part of that world. I'd want their blessing before I would consider it."

He also only just took on his new role on Bachelor in Paradise. If Wells has any plans to return to the next season as the bartender again, he probably can’t also be the next Bachelor. The two shows film at different times, but I just don’t see that working out.

Jorge was a staple at the Bachelor in Paradise resort for a while, so if the plan is to keep Wells as a permanent fixture during filming, then Wells can’t be the next Bachelor. The plus side, however, is that if Wells and Danielle M. want to give it a go in real life, away from the constant cameras, they already have a solid foundation to build on. And at this point, I think almost everyone who loves Bachelor Nation is rooting for them.