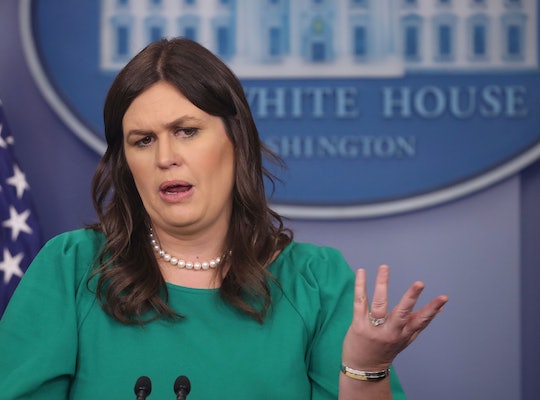 It was the refusal heard around the world. On Friday, White House Press Secretary took to Twitter to tell her followers that the owner of The Red Hen in Lexington, Virginia, asked her to leave the restaurant because not only does she work for President Donald Trump, she also backs policies that endanger LGBTQ people. Her tweet, of course, has led to a heated debate that's playing out on social media and in the news. And one common thread central to that debate: Sanders is a victim of discrimination, and is no different than the gay couple who was refused a wedding cake. But what happened to Sarah Huckabee Sanders is not the same as refusing to serve LGBTQ people, and here's why.

Red Hen co-owner Stephanie Wilkinson has told reporters that she asked Sanders to leave her Virginia restaurant because she works for an administration that discriminates and harms her LGBTQ workers, according to CNN. Sanders wrote on Twitter that she "politely left," and that she does "[her] best to treat people, including those [she disagrees] with, respectfully," CNN reported. Quickly, conservatives and progressives began to argue about Sanders' experience, the "hypocrisy of the left," and whether the White House press secretary was a victim of discrimination.

The answer: She isn't. Here's why.

Discrimination Is About Oppression

Discrimination is defined by the Merriam-Webster dictionary as:

a: prejudiced or prejudicial outlook, action, or treatment, [i.e.] racial discrimination; b: the act, practice, or an instance of discriminating categorically rather than individually

Then there's oppression, which Merriam-Webster defines as:

a: unjust or cruel exercise of authority or power; b: something that oppresses especially in being an unjust or excessive exercise of power, [i.e.] unfair taxes and other oppressions

When an entire group of people — say, the LGBTQ population — is discriminated against through laws and policies, that's oppression. Oppression cannot exist without discrimination. And inherent to both discrimination and oppression are disparate power dynamics. Which is why...

Private businesses, by law, have the right to refuse service to any patron, so long as that refusal is not against a protected class — race, color, national origin, religion, gender, pregnancy, disability, age, citizenship status, or veteran status. Federal law has yet to catch up to 2018, so sexual orientation and gender identity have yet to be explicitly recognized as protected classes under Title VII of the Civil Rights Act of 1964. But many states and cities have filled the gap by passing legislation prohibiting anti-LGBTQ discrimination at work or school, and in public spaces, including privately-owned restaurants.

Although Sanders can face discrimination because of her gender, that's not what happened here. At worst, what Sanders experienced is bias based on her politics — not her sexual orientation or any other intrinsic characteristic. (The city of Washington, D.C. does protect residents on the basis of their political affiliation, which is narrowly defined as "belonging to or supporting a political party," according to ThinkProgress, so that wouldn't even apply in this case.)

What's more, she is an elected official, which means she inherently holds more power over the owners of The Red Hen. The most Wilkinson can do is ask Sanders to leave. The least the press secretary can do? Prompt her boss — the president of the United States — to send out a wildly misinformed tweet that triggers his followers to not only harass the Virginia restaurant, but also a New Jersey establishment by the same name, yet has absolutely no affiliation, according to The Huffington Post.

Refusing To Serve LGBTQ People Is Founded In Religious Dogma

Conservatives outraged by what Sanders experienced have drawn comparisons to the recent U.S. Supreme Court ruling in Masterpiece Cakeshop v. Colorado Civil Rights Commission. But that's a disingenuous juxtaposition. Wilkinson didn't ask Sanders to leave because of her sexual orientation — she refused to serve the White House press secretary because the anti-LGBTQ policies Sanders supports directly harm some of The Red Hen's staff, according to The Washington Post.

Wilkinson, for her part, told The Washington Post that she asked Sanders to leave because:

I have a business, and I want the business to thrive. This feels like the moment in our democracy when people have to make uncomfortable actions and decisions to uphold their morals.

That quote is, in and of itself, problematic because a business owner could have easily said that in order to justify their decision to discriminate against LGBTQ people. In fact, back in 2012, Masterpiece Cakeshop baker Jack Phillips said he refused to bake a cake for a same-sex wedding because of his religious beliefs, according to the American Civil Liberties Union.

But, for as thorny as Wilkinson's quote is, there is a key difference in terms of intent. The Red Hen's co-owner did not lean on her morals to discriminate against an entire class of people. By contrast, that's exactly what Phillips did. While he discriminated against an individual couple, that couple represented an entire population that is refused service because of religious dogma. Take, for example, this Texas law that allows adoption agencies to cite "moral conviction" to turn away prospective same-sex parents.

The Red Hen's owner also cited facts to support her decision — she stands against the recorded harmful effects of the Trump administration's policies. Phillips (and adoption agencies that turn away same-sex couples) use a sentence from the Bible to support their views. There is no science or research that backs up the view that being LGBTQ is inherently wrong or hurts others.

Discrimination relies on an uneven distribution of power. And Sanders, in this situation, holds more power. She may have been mildly inconvenienced by having to find a new restaurant to dine in, but she wasn't oppressed.

Know who is oppressed? Every single person and family affected by the anti-LGBTQ bills that Sanders and the Trump administration support.