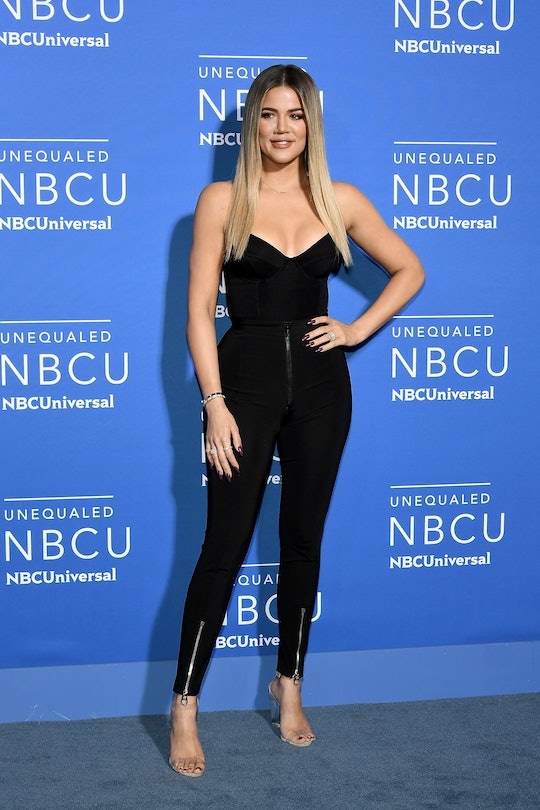 Fans Are Hoping Khloé Kardashian Will Air Her Birth On TV

Khloé Kardashian gave birth to her baby girl in Cleveland early Thursday morning, according to a report from TMZ. And because fans have been waiting for what feels like forever for this to happen, many of them are likely wondering if Khloe Kardashian will air her birth on TV sometime soon.

The Keeping Up with the Kardashians star has aired many private moments on the family's reality show. However, according to a report published by Radar Online last week, Kardashian was not planning to let cameras into her delivery room. “She’s the most down to earth of all the Kardashians and she wants a normal birth with no entourage, no cameras, no outrageous requests,” an anonymous source allegedly told Radar online. “She just needs a small room to herself, clean and neat.”

That adds up well with Kardashian's birth plan, which she discussed in an appearance on Jimmy Kimmel Live!. She explained to the talk show host that her doctor was flying out to Cleveland to deliver the baby, and that the only person required to be in the delivery room would be her boyfriend, Tristan Thompson.

However, after cheating allegations against Thompson surfaced just days ago, it's not confirmed if Kardashian actually allowed him in. TMZ reported that Thompson was there, but the couple has not commented on the birth news yet. Romper has reached out to reps for both Thompson and Kardashian regarding the cheating allegations, but did not receive an immediate response.

Kardashian also told Kimmel that her sisters and their mom, Kris, planned to fly to Cleveland to be there when she gives birth — although she wasn't too keen on them all being in the delivery room. She explained that besides Thompson, the other person she'd like to be there is her mom, followed by "whoever is going to be the calmest," and "whoever will annoy [her] the least." Totally fair.

All that being said, it also wouldn't be a surprise if Kardashian did change her mind and let her birth be filmed for Keeping Up with the Kardashians. After all, she took her shared the results of her first positive pregnancy test surrounded by the show's camera crew. In fact, Kardashian revealed on The Ellen DeGeneres Show that the crew found out Kardashian was pregnant before Thompson and the rest of Kardashian's family did. As transcribed by the Daily Mail, Kardashian said on Ellen:

It's clear that Kardashian is pretty comfortable around her camera crew by now — but it also totally makes sense that she'd want the birth of her first child to be a private moment.

Kardashian's older sister Kourtney let the show's cameras into the delivery room when she gave birth to her first two children. In fact, the show's cameras captured her pulling her children Mason and Penelope out of her body with her bare hands, as noted by People and the Daily Mail. She did not televise the birth of her youngest baby, Reign, according to Hollywood Life. Kim let the show's cameras film a little bit of North's birth, but not Saint's. There's still no word if Kylie Jenner giving birth to Stormi will be on the show, but considering how private she kept her pregnancy, it won't be a surprise if she takes a step back from the show altogether.

Whether or not Khloé Kardashian wound up letting cameras in the delivery room this morning, it's safe to assume she will share pictures of her bundle of joy sometime soon.