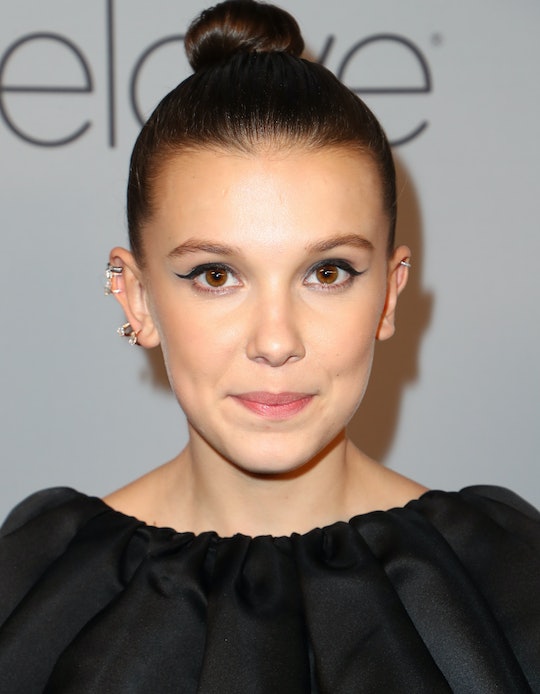 There may be only two seasons of Stranger Things out so far, but I’d be willing to bet my own Netflix subscription that the number of subscribers has gone up substantially since it premiered. The series was a fast hit, along with the young actors who star within it, so it's no surprise that the show has been nominated again for a SAG Award. But since we all love seeing Eleven on our screens, will Millie Bobby Brown be at the 2018 SAG Awards?

Stranger Things received a nomination for Outstanding Performance by an Ensemble in a Drama Series, which the cast walked away with after the 2017 SAG Awards. I don’t think any of us will forget the speech and Winona Ryder’s meme-inspiring facial expressions throughout the entire thing. So I have a feeling Brown will want to be around in case the series does just as well this time around.

In fact, Brown herself was nominated as well and for the second year in a row for Outstanding Performance by a Female Actor in a Drama Series. Although she didn't win last year, there’s a chance that her intense performance from Stranger Things Season 2 could have her bringing the award home, so there’s a good chance that she’ll be in attendance this year. When the news broke of her nomination, Brown took to Instagram to thank the Screen Actors Guild and she certainly made it sound like she'd be there.

Screen Actors Guild! Thank you SO much for recognizing me and our cast for the second year in a row! This means the world coming from you, our peers. I am so lucky and honored to have the privilege of playing Eleven - a strong, powerful, badass, strange, wonderful character! Can’t wait to celebrate with my Stranger Things family

Brown also tweeted about the SAG Awards earlier this month, showing off more of that excitement for the double nomination that could have her leaving the show on Sunday Jan. 21 with not one but two SAG awards in her hands.

Brown, along with the rest of the young and talented Stranger Things cast, was at the 2018 Golden Globes this year and she made a huge impact on the red carpet in a black dress in honor of the Times Up movement. Although Stranger Things didn't win for Best Television Series - Drama, she still seemed to have a fantastic time.

In the first season of Stranger Things, Brown was one of the many breakout stars of the show, but somehow Season 2 surpassed all expectations of what the sophomore season of the Netflix series would be. Even though Eleven was apart from most of the other characters for the majority of the season — instead sharing an increasingly close familial relationship with David Harbour’s Sheriff Hopper — Brown's performance continued to wow viewers. For that alone, she’s absolutely deserving of that SAG Awards nomination, but even if Brown is snubbed this time around, she’s probably going to be in attendance with the rest of the Stranger Things crew on the red carpet.

The 2018 SAG Awards might not be as big of an event as the Golden Globes or the the Oscars, but it’s still important in recognizing talent in TV shows and movies from the past year that gained a lot of momentum. So there’s no reason why Brown wouldn't be there with her castmates in solidarity and to continue to be such a source of inspiration to young kids. Let's hope that Brown is honored with another award for her huge talent.

More Like This
Jimmy Kimmel Apologized To Quinta Brunson For His "Dumb Comedy Bit" At The Emmys
'The Proud Family: Louder & Prouder' Is Returning For Season 2 On Disney+
The Office Halloween Episodes: A Definitive Ranking
Kim Kardashian Stars In Hilarious House Of The Dragon Parody, The Targashians