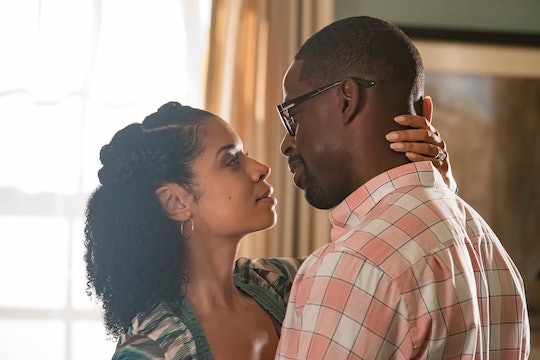 Randall & Beth May Be Headed For Heartache On 'This Is Us'

When Beth and Randall took Deja in as a foster child at the beginning of This Is Us Season 2, it seemed to be with the intent of eventually adopting her and if she had a truly absent mother, it would have probably worked out that way. But now that Randall had the chance to meet and speak with her mom and find out more about her, will Randall and Beth adopt Deja on This Is Us? Her time with them may eventually come to an end since it was made pretty clear on Tuesday’s episode "The Most Disappointed Man" that Deja’s mom, Shauna, cares very deeply for her daughter.

Instead of a stereotypical troupe of Deja coming from an abusive and neglectful home, it’s more about how her mom made a couple of poor choices along the way and found herself in trouble more than once, but overall she seems to want what’s best for Deja. And, in her own words, "If you wanna know what’s best for her, its me. And the second I get out of here, I’m coming for her."

While it’s unclear how much jail time Deja’s mom is going to get for having an unlicensed gun in the car while driving with Deja, it seems like Shauna has every intention of not only getting out of jail in a timely manner, but also taking Deja back home with her once her sentence is up. And as sad as it’s going to be to watch Randall and Beth say goodbye to Deja when that happens, that might be the way this particular story ends.

One of the things Beth was adamant about when Randall pressed the topic of adoption was taking in a child who truly needed them rather than an infant, in order to really change someone’s life. By taking in Deja, they’re working to do that, but once her mom is out of jail and fit to bring her back home, their deed will be pretty much completed. Overall, Beth and Randall obviously want what’s best for Deja, even if that means supporting the clearly close bond that she shares with her mom. And since Randall took it upon himself to give Shauna their home phone number to allow contact between them, putting her feelings first is definitely a priority for him.

I have no doubt that if given the chance, Beth and Randall would totally adopt Deja since we all saw the tiger claws come out when they discussed the botched visitation. But since her mom is intent on getting her back, Deja will likely be going home in the end. This leaves Beth and Randall to decide what their next step is, which will probably come toward the end of the season.

Will they decide that they want to move ahead with trying to adopt another child, or maybe start to take on a regular influx of foster children? Randall’s talk with the social worker about making a difference and helping children might have been more than a wakeup call to him that the system does what it can to help children. By the end of the season, he could have another "aha" moment and consider becoming a more permanent foster parent on a regular basis. Or, he and Beth could always decide that the heartache of losing Deja is too much for them and Season 3 will bring a whole new story arc for Randall’s branch of the Pearson family.

Either way, as tear-inducing as it will be, Deja will probably go home with her mom by the end of the season, leaving Beth and Randall to figure out what comes next for them.