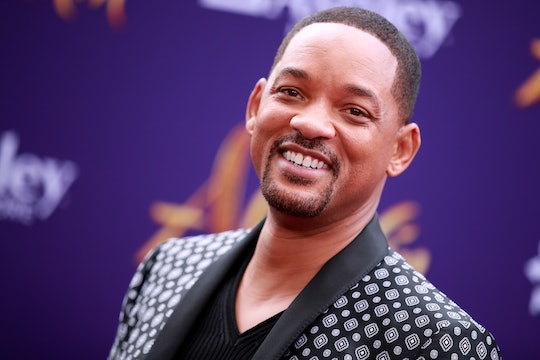 I won't lie to you guys; when I first found out that Will Smith was going to be playing the Genie from Aladdin I had some feelings. I guess for me, a huge fan of the original 1992 cartoon version from Disney, I could really only imagine Robin Williams in that role. It made me a bit sad to realize he was being replaced, and perhaps it wouldn't have mattered who took over the role. I just wasn't going to be okay with it. I've changed my mind based on one short video of Will Smith staying in character as The Genie for the cutest possible reason ever. Sometimes you have to stay open to change, I guess.

The Fresh Prince Of Bel Air actor was walking the (non-flying) red carpet on Tuesday at the El Capitan Theater in Los Angeles for the premiere of the new live-action version of Aladdin. As he walked along, presumably getting kudos for his performance and big congratulations along the way, Smith was approached by two little girls, internet sensations Mila and Emma Stauffer. It seems they weren't all impressed with this regular human being in front of them and made it clear who they really wanted to see; the actual Genie.

In the video Smith asks the two little girls if they're excited to see Princess Jasmine (played in the film by British actress and singer Naomi Scott), maybe because he knows who most little girls would be excited about seeing in that crowd. They say they are, but more importantly, they ask;

Without missing a beat, Smith explains to the two little girls:

When I'm in public, I can't use my magic because then people will know I'm the Genie. So I have to pretend like I'm a regular person when I'm in public because sometimes people get scared of genies and stuff like that.

Then he distracts them by asking if they want to come with him to meet Princess Jasmine, proving he is definitely a parent with three kids because his distraction skills are next level.

And that's Genie magic if I ever saw it.

Speaking of the Genie, apparently I'm not the only one who was feeling a bit doubtful about climbing on into a magic lamp that once occupied the late, great Robin Williams. Smith told Vanity Fair that he had his reservations about playing the Genie at first:

When I got the call to play Genie, my first reaction was, ‘Uhhh? I’m not sure about this, only because Robin Williams did such a brilliant job. He revolutionized how things worked in animated movies, and introduced to the world what you could do by using funny, modern references for adults. I thought, what would I do differently, and what could I add? It was terrifying, because Robin didn’t leave much room for improvement.

Fortunately he reconsidered, because he told the media outlet that working on Aladdin was "the most fun he's ever had making a movie."

And playing the magical Genie also means he can keep the magic alive for kids, on the screen or on the red carpet.